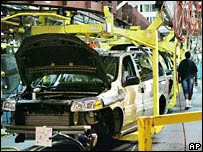 Okay, okay, yesterday's post on health care and GM was very badly expressed, so let me try again, the short(er) version. Any health care reform that can free employers from the burden of providing insurance for their workers—let's say, Medicare-for-all—will make the economy far more efficient in all sorts of good ways. Very good ways. It will also be far, far more equitable from a health standpoint. So yes, bring on reform.

But like any redistribution of wealth, reform will create winners and losers. A company like GM will "win" and become more "competitive" if, after reform, it can lower the total compensation it pays to workers. Presumably it thinks that it can. Arguably, the UAW would try to fight for that pot of money suddenly "freed up" by health care reform. Certainly my local would do exactly that, especially if we all suddenly faced higher taxes to pay for Medicare-for-all or whatever. Unions tend to be justifiably proud of their hard-fought health benefits, and won't give up that money easily. Management will want that freed-up money to go to profits, obviously, or R&D, or whatever. Maybe they can learn to share. Lion, lamb, etc.

In an abstract "perfect" market, total compensation wouldn't change at all (since that's the price of labor, determined by supply and demand), and health care reform wouldn't reduce the labor costs of businesses one whit. We don't have "perfect" markets in the real world. So figuring out who the winners and losers are all depends on where and on whom the taxes and costs fall after the dust all settles. In the short run, the transition could get ugly. In the long run, we have a more sensible and equitable system. That's all I'm saying.

If health care reform, like Medicare-for-all, can lower total health care costs without hurting health outcomes—and the European experience suggests this is very likely—then the winners will win much more than the losers lose. Think of it like free trade. Maybe we'll all be winners. One can hope. By the way, it seems that DLC darling Jacob Hacker has proposed his own plan for universal Medicare. Here's a magazine article where he justifies it. It's good stuff. I back it. Maybe someone other than Dennis Kucinich will propose something similar in 2008. One can hope.