Official Paranoia
It's a random bit of quoting, I know, but I rather liked this passage from Rick Perlstein's Before the Storm: Barry Goldwater and the Unmaking of the American Consensus, on why the John Birch Society had such an ardent following in the 1950s and '60s: 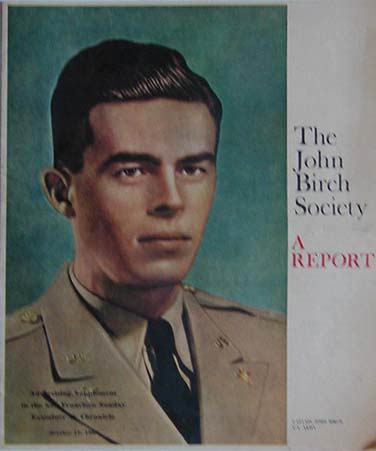 Since McCarthy's day, liberals had been wondering why apparently intelligent people could believe that the wrong kind of politics in the United States would inexorably hasten its takeover by the USSR. It was concluded that these were people who feared for their status in a rapidly changing, complex urban society, who pined for a simpler past (they were for the "repeal of industrialism," said Commentary, which was odd, since most Birch leaders were industrialists).

The cognoscenti neglected the simplest answer: people were afraid of internal Communist takeover because the government had been telling them to be afraid—at least since 1947, when George F. Kennan argued in "The Sources of Soviet Conducts," the founding document of U.S. Cold War doctrine, excerpted in Reader's Digest, that "exhibitions of indecision, disunity, and internal disintegration within this country have an exhilarating effect on the whole Communist movement."

Through the 1960s, AFL-CIO president George Meany loved to flatter rank-and-file members that they were the first line of resistance against the Communists: in Czechoslovakia, he said, "they controlled the trade union movement, and within seven days they controlled the country." Attorney General Robert Kennedy told a 1961 press conference, "Communist espionage here in this country is more active than it has ever been." (There had been none to speak of since World War II.) Army recruits saw films like Red Nightmare, narrated by Jack Webb, which depicted an ersatz American town deep within the Soviet interior where spies were supposedly training in indigenous American arts like sipping sodas at drugstore fountains in order to infiltrate the United States.

You could no less avoid breathing in a bit of paranoia in Cold War America, in fact, than you could soot in Charles Dickens's Manchester. Did Birchers and their ideological cognates claim that dangerous "fallout" from nuclear testing was a hoax? So did the Atomic Energy Commission, all through the 1950s. And it was the "discoveries" of the CIA chief of counterintelligence, James Jesus Angleton, not Robert Welch, that a KGB "Master Plan" allowed no Soviet to defect to the United States except as a KGB double agent (thus bona fide Soviet defectors were often kept naked in isolation in a brightly lit room and had to submit to cruel three-year interrogations to force them to give up their KGB secrets).

It shouldn't have been surprising that the John Birch Society was able to win a membership in the tens of thousands in an officially encouraged atmosphere of fear and suspicion.

Sure, sure, that's not the only reason the group had tens of thousands of members (nor does it excuse their behavior, etc.), but... it's a fair point.