Stick PIt
Nothing about working in a slaughterhouse sounds pleasant. There's the meager pay: $21,000 a year, on average. There's the sheer danger of it all: The dizzying pace of the plant forces workers wielding sharp knives to work very rapidly, and workers face an absurdly high risk of death or disability. Safety standards are atrocious. There's also the... well, hell, just read the description: 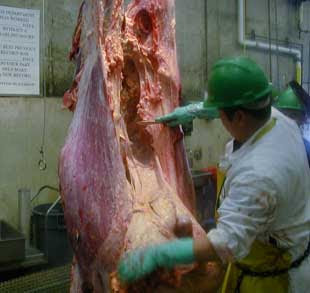 Human hands… must make the same knife or scissors cut to slit open carcasses from anus to breast or the same twist of the hand to yank out viscera at a grueling pace, set by a relentless conveyor belt and reinforced by circulating foremen, while workers are standing in pools of water and grease in temperatures that range from freezing to ninety-five degrees and being pelted by flying fat globules or dripping blood.

Most of that's probably familiar to anyone who's read Fast Food Nation (or the Mother Jones piece that was the basis for that part of the book). But what's new to me is the angle Jennifer Dillard brings up in this recent paper: namely, the psychological toll of doing all that killing. Here's one interview with a slaughterhouse worker:

The worst thing, worse than the physical danger, is the emotional toll. If you work in the stick pit for any period of time, you develop an attitude that lets you kill things but doesn’t let you care. You may look a hog in the eye that’s walking around down in the blood pit with you and think, God, that really isn’t a bad-looking animal. You may want to pet it. Pigs down on the kill floor have come up and nuzzled me like a puppy. Two minutes later I had to kill them—beat them to death with a pipe. I can’t care.

And another, even more gruesome passage:

Another time, there was a live hog in the pit. It hadn’t done anything wrong, wasn’t even running around the pit. It was just alive. I took a three-foot chunk of pipe—two-inch diameter pipe—and I literally beat that hog to death. Couldn’t have been a two-inch piece of solid bone left in its head. . . . It was like I started hitting the hog and I couldn’t stop. And when I finally did stop, I’d expended all this energy and frustration, and I’m thinking, what in God’s sweet name did I do? ... People go into Morrell expecting respect and good working conditions. They come out with carpal tunnel, tendonitis, alcoholism, you name it, because they’re under incredible pressure and they’re expected to perform under intolerable conditions. Or they develop a sadistic sense of reality.

That's horrible, but not surprising. I certainly couldn't kill a pig. Most people couldn't—that's (partly) why we have slaughterhouses in the first place. And while I've never really believed that a person should only eat something he or she can kill with their bare hands, it is an incredibly gruesome task to outsource, perhaps even different in kind from other wretched tasks that low-wage workers end up doing. Maybe this can all be reworked into a moral case for vegetarianism at some point.

There's some evidence that slaughterhouse work is associated with increases in alcoholism and violent crime, but no one's done any rigorous studies. One big question is how to curb some of the worst, most trauma-inducing conditions. OSHA rarely addresses psychological hazards in the workplace, and, in any case, has never done a fantastic job of protecting slaughterhouse workers. Dillard suggests a few potential legal remedies, but what about labor unions? I'd be curious to know what the difference is between unionized and non-unionized slaughterhouses on this score. (Not that organizing a meatpacking plant is even remotely easy these days...)