Could Solar Power Do It All?
You know, solar power sometimes gets a bad rap. By that, I mean: Few people believe it will ever play more than a bit part in the grand U.S. energy drama going forward. All the scientists are saying we've got to slash emissions in the United States 50 to 80 percent by mid-century, and most onlookers say, well, that means either we'll have to dream up some way to capture and sequester carbon from coal-burning plants, or do what John McCain says and go full speed ahead with nuclear power. But nuclear and "clean" coal are the only things that can provide most of the energy we need. Wind and solar? Pfft, too small. Too unreliable. And so on. 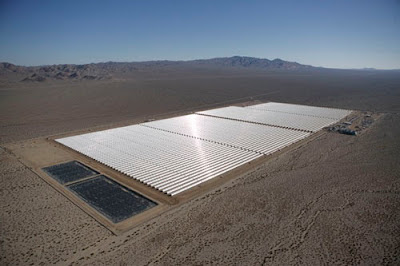 So, on that note, this Scientific American cover story on "A Solar Grand Plan" was fascinating. The authors (we'll call 'em Zweibel et. al.) argue, fairly convincingly, that the technology exists either right now or will in the near future to build a massive solar-power infrastructure that could supply 69 percent of America's electricity—and 35 percent of its energy—by 2050, which would cut CO2 emissions by 62 percent. (This assumes we electrify our transport with, say, plug-in hybrids.) Bear in mind, this is probably a conservative estimate—they're ruling out massive technological leaps, for one. But it's a grand vision all the same.

Yes, there are caveats and technological hurdles. The authors estimate that the efficiency of photovoltaic cells would have to rise to 14 percent—although current modules are at about 10 percent, so this isn't an insurmountable leap. Also, it would take about 30,000 square miles to install all those photovoltaic plants—and we're probably talking about the Southwest. That's a lot of wilderness to plop down on top of, but it's less space than the coal industry uses, when you include mining. Also, fewer mountains pillaged. And photovoltaic plants don't need much water, which is a bonus for the parched West. (Nuclear plants, by contrast, are water-guzzlers.)

The biggest question, though, is storage. The sun doesn't shine all the time. And batteries are still too expensive and inefficient (though who knows what advances are on the way). Zweibel et. al. suggest that compressed-air energy storage is the answer—in which the electricity from the solar plants compresses air into underground caverns, which then, during off-hours, is released to power turbines. One surprise: The authors estimate that there are enough such caverns around the country—many near metro areas—to do this. We'd also have to install a new system of high-voltage direct current lines to bring the power from the Southwest to the rest of the country.

All that won't be cheap. Between now and 2020, the government would have to spend at least $420 billion on subsidies, infrastructure, and so on. After that, if all goes well (and, hell, it probably won't), the solar industry would be on its way. On the other hand, the annual expense involved would be less than current farm subsidies, and the total spending would be about what was needed to build the country's high-speed telecommunications infrastructure over the past four decades. So it's not like this is totally outlandish or unprecedented—if Congress auctioned off all the pollution permits from the Lieberman-Warner climate bill, it could easily raise the money needed. Plus, after a while we'd be saving money—no more fuel costs.

Anyway, I'm not saying the United States should go out and do this tomorrow. But it's at least a way of thinking about how the U.S. could go carbon-free without giving massive subsidies to the coal industry or nuclear industry (both of which could well cost even more—especially when you count the waste disposal, security, etc. needed for McCain's proposed nuke-o-rama.) Personally I'd prefer a more distributed energy system, whereas Zweibel et. al. only see 10 percent of electricity coming from PV cells on rooftops, etc., by 2050, although, obviously, as the technology advances that would change. But like I said, a lot of this is about giving a sense of what's possible beyond the "clean" coal/nuclear drumbeat.