What's Wrong with Prostitution?
Every time some public official gets caught with his pants down in a brothel, Scott Lemieux e-mails me to say I should dredge up stuff I've written in the past on the question of whether prostitution should be legal or not. Well, okay, I doubt I have that much to add, but seeing as how Eliot Spitzer's just been busted for "arranging to meet with a high-priced prostitute at a Washington hotel last month," and seeing as how I am trying to make a good-faith effort to revive this little blog, why not take the low road and cannibalize some old posts on the subject?

The moral questions surrounding prostitution are thorny (is it ever freely chosen? is it always coercive?), so let's set that aside and just note that criminalization creates a host of practical problems—and usually makes the sex trade more dangerous. One recent study by Steven Levitt and Sudhir Venkatesh found that many police officers rape prostitutes on a fairly regular basis, holding the threat of arrest over their heads (as do gang members offering "protection"). And, in the underground market, condoms are used only 20 percent of the time, versus the near-100 percent rate you see in legal-but-regulated brothels. 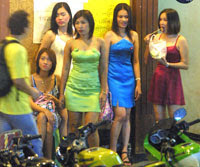 There's also something to the criticism that many attempts to stop sex trafficking end up hurting women who join the sex trade "voluntarily" (yeah, those are scare quotes). The International Justice Mission, for instance, a Christian organization that helps the Thai police bust brothels, frequently "rescues" women who don't actually want to be freed. "We need to make money for our families," one woman said after a raid in 2001. "How can you do this to us?" It's not as if those women can go find cushy office jobs instead. Most of them are faced with an array of bad options, and having the state insist that they pick one bad option over another doesn't necessarily improve their lives. (Of course, this may not be as true for the $5,500-an-hour prostitutes that Spitzer seems to favor, but who knows?)

So there's that. But I'm also not totally convinced that we should do what many sex-worker advocates in are calling for and decriminalize the business entirely. Now, these advocates talk and listen to actual sex workers and know infinitely more than I do about this, but there's at least some basis for hesitation. In 2003, the Scottish government, looking to revamp its own prostitution laws, did a massive report on different policies around the world, and discovered that legalization-plus-regulation comes with its own set of problems.

The study found that, as you'd expect, legalization often led to a dramatic expansion of the sex industry: In , brothels proliferated to the point where they overwhelmed the state's ability to regulate them, and became mired in organized crime and corruption. In many countries, child prostitution and the trafficking of foreign women also increased dramatically. More importantly, surveys found that many sex workers still felt coerced and unsafe even after decriminalization. In the —often held up as a model—a survey done in 2000 found that 79 percent of prostitutes were in the sex business "due to some degree of force." Back home, I'm not sure how well Nevada's legalization scheme has worked. Here's a study showing that women in regulated brothels face significantly lower levels of violence, although here's evidence that conditions are still frequently horrific.

I used to think the most promising approach was 's. There, prostitution is considered "an aspect of male violence against women and children" and treated as such. Legislation, passed in 1999 as part of a broader "violence against women" bill, partly decriminalized the selling of sex while making the buying of sex illegal (pimping was already outlawed). On the other hand, prostitutes are still punished in various ways—known sex workers can lose custody of their kids, for one. And although the bill provides funds to help prostitutes who want to get out of the business, many sex workers say the aid is inadequate. Worse, because prostitution is not supposed to exist, there are now fewer drop-in health centers available for sex workers.

The actual effects of the law are still murky. Prosecutions of male buyers and johns went up dramatically, and street prostitution in has dropped by two-thirds since 1999. But it's unclear whether the sex trade was simply pushed underground, as was originally feared. Official statistics give conflicting answers. Some studies estimate that the total amount of prostitution has remained unchanged, although one non-profit estimated that about 60 percent of prostitutes took advantage of the social service funds and succeeded in getting out of the business. My sense is that there's just not a lot of reliable data here.

For an anecdotal take, Petra Östergren interviewed a number of Swedish sex workers who agreed that prostitution had been forced underground. Many now have to work indoors, alone, and are ripe for exploitation, especially by "rent pimps." A 2004 report by the Norwegian Ministry of Justice, comparing the Swedish and Dutch approaches, argued that many Swedish sex workers are now "more difficult to reach by the support system," and their reliance on pimps—who can help them avoid police detection—"has probably increased." The report seems bullish on legalization, but notes that even in , a "gray market" has emerged, beyond the eye of the state, where trafficking and coercion remain prevalent.

So, yes, our currently policies are grotesque, but honestly, I don't know what the ideal alternative is. I'd lean toward legalize-and-regulate as the least-bad option, although the idea of providing generous support for women who want to get out of the sex trade sounds like the best idea on offer. But if Sweden can barely manage it, good luck putting anything like that in place in the United States.