In Search of a Greener Laptop
It's never that surprising to hear that some companies aren't quite as eco-friendly as they claim to be, but sometimes the examples are worth examining in detail. Last week, Ben Charny reported in The Wall Street Journal that Apple Inc., which has gone out of its way to flaunt its green cred, doesn't always stack up so well to its competitors: "For example, Dell and Hewlett-Packard report buying much more clean energy than Apple; Dell 58 times more, and Hewlett-Packard five times more." 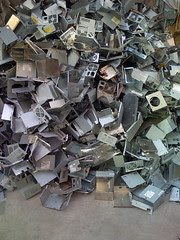 Now, clean energy is a decent metric, though a computer's impact on the environment mostly depends on how much energy it consumes after it's been purchased. On that score, MacBooks do... okay. That said, I wish these comparisons would look more broadly at product durability. A company making laptops that last five years on average is greener than one whose computers last for just three, consuming fewer resources and spewing less hazardous waste—especially since e-recycling programs are often flawed. And, as EcoGeek's Hank Green reported last year, some of Apple's newer iPods and iPhones are designed to be virtually impossible to repair, which ends up encouraging people to junk their old gadgets and buy new ones.

For a longer discussion of this topic, Giles Slade's Made to Break is a fascinating book, and some of his insights on how businesses make short-lived products to encourage excess consumption should be taken to heart when trying to figure out just how green a company really is. True, the EPA considers "product longevity" as a factor in its EPEAT labeling for electronics, but that system is voluntary and doesn't work terribly well. Recommending that computers have "modular designs," say, hasn't stopped the average lifespan of personal computers from plummeting from six years in 1997 to two years in 2005. It's likely that rethinking the whole notion of "planned obsolescence" would involve very drastic regulatory (and probably cultural) changes. Maybe that's not desirable—maybe it's a good thing that our cell phones go out of style every 12 months. In the meantime, though, we could probably stand to require better buyback and recycling programs.

While we're on the topic, the Journal also had a fantastic dissection of Dell's claims to be "carbon neutral." Turns out, when Dell's executives fling that term around, they're only talking about Dell proper—they're not talking about Dell's suppliers or the people running Dell computers. Which basically means they're talking about just 5 percent of Dell's actual carbon footprint. And even that 5 percent achieves neutrality mostly via carbon offsets, which are often quite dubious (sure they're planting a forest—but how do they know the forest wouldn't have been planted anyway?) Well-meaning corporate initiatives are nice, but they're no substitute for better regulation and carbon pricing.