Inside the Machine
Over the holidays, I picked up an old, yellowing copy of Mike Royko's Boss, his best-selling and unauthorized—to put it lightly—1971 biography of former Chicago mayor Richard J. Daley. This may sound naïve, but I found the book incredibly eye-opening. Sure, I've always had a hazy sense of how urban machine politics worked, and I've heard a fair bit about how horrifically corrupt and mismanaged many big cities were back in the 1950s and '60s—especially if you were poor or black—but Boss doles out the gory details. And, yes, later historians have softened Royko's portrait of Daley as a corrupt, racist strongman, but as best I can discern, the book's held up reasonably well.

Daley didn't create Chicago's Democratic machine, but by the time he won his first mayor race in 1955, he had worked in all of its critical nodes—from key budget positions to state party chair—and was able to consolidate his control over the vast apparatus like no one else before him, or since. Not even Rod Blagojevich. Not even close. 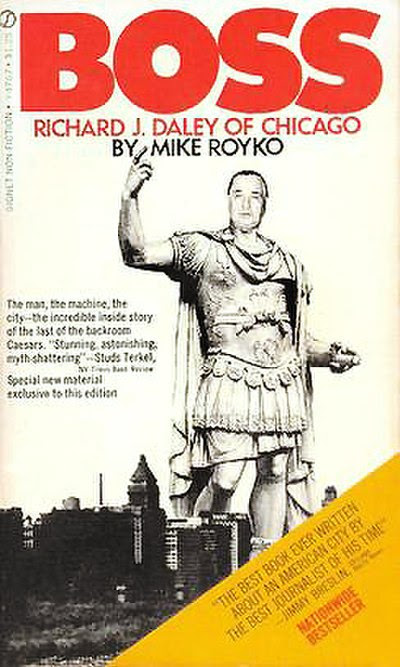 It went like this: Chicago had some 3,500 precincts, each with captains and assistant captains and underlings galore who devoted their energy to turning out votes—or stealing them, if it came to that—in exchange for well-heeled patronage jobs. Not just government jobs, but jobs at racetracks or public utilities or private industries—the Machine had the power to all sorts of jobs to supporters, since, after all, these utilities and contractors relied on the Daley administration for contracts and business. And the Machine always delivered the votes. (True, it didn't win Illinois for Hubert Humphrey in 1968, though Royko argues that was only because Daley had lost faith in Humphrey by that point and focused on downticket races.)

At its peak, the Machine seemed practically omnipotent: Judges came up through the Machine. The top law firms were run by lawyers close to the Machine. Who else would you want handling a zoning dispute for you? And ward bosses usually used their power to enrich themselves. Companies rushed to pay premiums to insurance firms run by ward bosses, lest they fall afoul of the county assessor or zoning board. And Daley stood on top of it all. Only Daley could keep track of all the moving parts. Only Daley, who retained his party chairmanship, knew how much money was flowing in, and how much flowing out.

Most of his money came from contractors, since the hallmark of Daley's administration was building lots and lots of stuff in Chicago's downtown. The Dan Ryan Expressway. The John Hancock Building. Most of O'Hare Airport. And on and on and on. All Daley's doing. The revisionist take on Daley seems to hold that because he revitalized downtown he saved Chicago from the blight that later afflicted, say, Detroit and Cleveland. Maybe. Another revisionist take is that Daley got things built that a non-boss mayor never could have. Maybe. But there were costs, of course. Old neighborhoods were razed in the name of "urban renewal"—including a loyal Italian ward in the Valley—and replacement housing never built. Commonwealth Edison, which ran a hideously dirty coal plant responsible for one-third of the city's pollution, was allowed to evade pollution laws simply because a boyhood friend of Daley's sat on the board.

And Daley's tenure reads like an utter disaster when we're not talking about gleaming buildings. Royko points out the grim irony in the fact that black voters continued giving Daley his electoral majorities despite the fact that he gave them absolutely nothing. (Not that black voters always had a choice: Precinct captains weren't shy about issuing threats in poorer neighborhoods—vote or else you'll lose your public housing, and, yes, I think I will go into the voting booth with you...) During Daley's tenure, the black neighborhoods had some of the worst slums in the country, crumbling schools, and rampant crime—since police often focused more on extortion than crime prevention. (True, the police department did get cleaned up a bit after Daley appointed Orlando Wilson, a UC law professor, as police chief—but Daley was forced to do this after it was revealed that a number of his police officers were running their own armed robbery gang.)

Easily the most stunning part of Royko's book is his description of how Daley fended off Chicago's civil rights demonstrators—including Martin Luther King. Daley, of course, had no interest in undoing Chicago's sharply enforced neighborhood segregation. Even if he had wanted to—and there's no indication that he did—the city's white voters, who were prone to violence anytime a black person so much as walked through their lily enclaves, would've revolted. But Daley was able to do what the mayor of Birmingham could not and neutralize King by, essentially, co-opting him. The two would meet and Daley would insist that he was a liberal, point to all his well-meaning social programs, heap promises on high... it was all b.s., but what could King say to that?

Another provocative bit in Royko's book was his short discussion of the Black Panthers. The black gangs operating in Chicago during the 1960s were hardly angelic, though some of them did run health clinics and school-lunch programs and broker truces between street gangs. But Daley wasn't chiefly worried about the violence. He was worried that these groups might eventually turn to politics. After all, Daley himself had, as a youth, been a member in a violent Irish gang, the Hamburg Social and Athletic Club, which eventually became a "mainstream" political organization that organized voters, elected local alderman, and launched many a high-flying political career. It wasn't hard to envision the Black Panthers following a similar trajectory, so Daley ordered his police chief to declare war.

Like I said, I'm sure there have been plenty of reassessments of Daley since Royko's unrelentingly scathing account (which, incidentally, was banned from many a Chicago bookstore upon release by order of Hizzoner himself). But Boss is definitely worth reading. Very often, people will tell the story of urban decay like this: Cities were flourishing in the 1940s and 1950s but then fell to tatters in the late '60s with the rise of crime, integration, busing, white flight, and so on. Royko makes a very good case that the rot began long before then.