It's Hue You Know 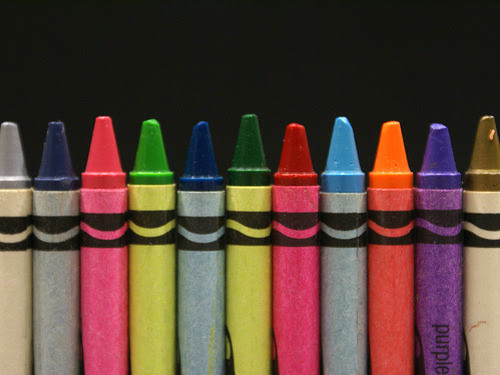 Here's a good Monday diversion: Wikipedia's master list of color names. Learn your cobalts and ceruleans and cyans. Some of the terms on this list are fairly obscure: Would you ever, in a million years, have guessed what color "Razzmatazz" is? (It's a sort of magenta.) But some of the names are hilariously perfect—"old rose" denotes the hue of aging, sickly rose petals. And some of the terms made me realize how easily I could distinguish shades I hadn't even realized were distinguishable until I saw the names for them: I could picture right away the difference between "Islamic green" (think Saudi flag) and "shamrock green."

More clicking around... There's also a complete list of every single crayon color that Crayola has seen fit to christen over the years. Some of the names have been changed, sometimes mysteriously so. In 1990, "maize" (a childhood favorite of mine, handy for drawing golden retrievers and buried sea-treasure) was replaced by the weedier name "dandelion." The color itself changed slightly, too: Appropriately, dandelion looks more like the drab patches of yellow you'd see on an abandoned lot while maize evokes sunny Ukrainian wheat fields. Why'd they get rid of it?

Some of the Crayola color names are frivolous and totally inapt: I have no use for "laser lemon" or "Fuzzy Wuzzy brown" or even "radical red" (which, perhaps to protect kids from creeping Bolshevism, actually denotes a watery hue that's more pinkish than Pinko). But some of the Crayola names should be added to the original master list of English color names—"Granny Smith green" is an amazing term, instantly visualized, and as best I can tell has no analogue on the grown-ups' list of colors.

A few clicks later, we learn that Hungarian is the only known language to have two "basic" words for red, "piros" and "vörös." Now, it's not so unusual for a language to have a different set of basic color terms than English does: For instance, both "blue" and "azure" are basic color terms in Russian, while only "blue" is a basic color term in English (in the sense that native English speakers consider azure a type of blue, which is not the case with, say, green). What makes the Hungarian case odd is that red is the most basic color—it's the third color languages acquire a word for, after black and white. Also, there's this queer business:

* Expressions where "red" typically translates to "piros": a red road sign, the red line of Budapest Metro, a holiday shown in red in the calendar, ruddy complexion, the red nose of a clown, some red flowers (those of a neutral nature, e.g. tulips), red peppers and paprika, red card suits (hearts and diamonds), red traffic lights, red stripes on a flag, etc.

You know, those lists made sense for a few short moments, and then I was lost again.