Outsourcing the Brain
In a chat with The Philosopher's Magazine, David Chalmers lays out his theory of the "extended mind," arguing that our cognitive systems are more than just what's crammed inside that gray matter in our skulls. The mind should be thought of as a larger, extended system that can encompass even gadgets like the iPhone: 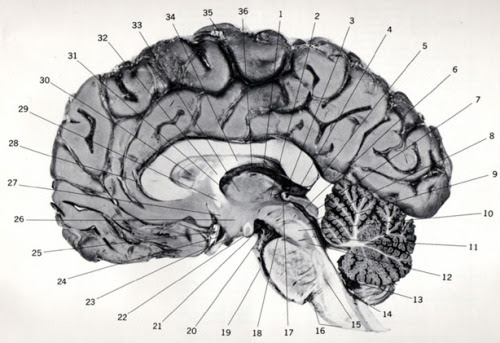 "The key idea is that when bits of the environment are hooked up to your cognitive system in the right way, they are, in effect, part of the mind, part of the cognitive system. So, say I'm rearranging Scrabble tiles on a rack. This is very close to being analogous to the situation when I'm doing an anagram in my head. In one case the representations are out in the world, in the other case they're in here. We say doing an anagram on a rack ought be regarded as a cognitive process, a process of the mind, even though it's out there in the world."

This is where the iPhone comes in, as a more contemporary example of how the extended mind works.

"A whole lot of my cognitive activities and my brain functions have now been uploaded into my iPhone. It stores a whole lot of my beliefs, phone numbers, addresses, whatever. It acts as my memory for these things. It's always there when I need it."

Chalmers even claims it holds some of his desires.

"I have a list of all of my favorite dishes at the restaurant we go to all the time in Canberra. I say, OK, what are we going to order? Well, I'll pull up the iPhone—these are the dishes we like here. It's the repository of my desires, my plans. There's a calendar, there's an iPhone calculator, and so on. It's even got a little decision maker that comes up, yes or no."

Fine, I buy it. (Scrabble racks!) The original paper that Chalmers and Andy Clark wrote on the subject invented an Alzheimer's patient named Otto who jots things down in his notebook so that he won't forget them. When you or I need to conjure up an address or name, we just summon it from some musty alcove in our memory. When Otto needs a fact, he flips through his spiral notebook. We consider memory part of the mind, so why can't we say that Otto's notebook is part of his mind? What's the difference? It's a short hop to declaring that an iPhone can be part of one's extended mind, too.

Maybe all this just means that "mind" is an unduly foggy term. Let's all thank the relevant deities I'm not a philosopher and don't have to tear hair over this. It is odd, though, how memory works in the Internet age. When I'm writing about energy issues, let's say, then instead of learning all the nitty-gritty details about how utility decoupling works or what the latest data on snowfall in Greenland says, I never bother memorizing the details. Instead, I'll just get a feel for the main concepts and remember where on the Internet I can find more information in a pinch.

Now, sure, I do the same thing with books or notes, but I rely on this method much more often now—and, of course, the Internet's always available, making the need to memorize stuff even less acute. My head's filled with fewer actual facts and more search terms or heuristics. Everyone does it. Emily Gould recently wrote a indispensable post about Mind Google, which works like this: Rather than reaching instinctively for your iPhone to settle some trivia dispute with your friends (who did the voice of Liz in Garfield: A Tale of Two Kitties again?), you just rack your futile brain about it and then, later, when you're in the bathroom gazing at the tiles and thinking about something else entirely, the answer magically slaps you in the face. ("Jennifer Love Hewitt—of freaking course!")

So some facts are still up in the old noggin. I mean, it's not like you can just do without facts altogether. It's just more efficient to outsource a larger chunk of stuff to that great hivemind on the Web. Probably a net plus. Though I wonder if someone like (oh, say) Thomas Pynchon could've written Gravity's Rainbow if instead of cramming all that stuff about rocket science and German ballads and Plato and god knows what else in his skull, he was always saying to himself, "Eh, I don't need to remember this, I'll just look it up on Wikipedia later..."

One more thing about the extended mind. It ought to include other people, too. Shouldn't it? I know I have a bunch of stories and anecdotes I can't tell—or at least tell well—without some of the other participants around to help me fill in the details and color. In effect, I have to recreate the memory with someone else. I read somewhere once a devastating article about how older widows essentially lose a large chunk of their memory after their partner dies, because there are many events that could only recollect "together," with their spouse. No, wait, maybe this was in a novel? Or a This American Life podcast? Oy, my brain's a barren wasteland—off to wheedle the answer out of the Internet.