Lost In Translation
There are plenty of English-language writers who sell a lot of books overseas—it's not uncommon for even lesser-known American authors to get their novels translated into multiple languages. But the reverse doesn't hold nearly as well. Only a very small fraction of foreign-language authors ever manage to get published in the United States. The last two literary Nobelists, Herta Müller and J.M.G. Le Clézio, weren't widely available in English until after they won their prizes (at which point publishers scrambled to crank out translations). Why does the flow mainly go in one direction? It doesn't seem to be because Americans are boors. Emily Williams, a former literary scout, offers up a more subtle explanation: 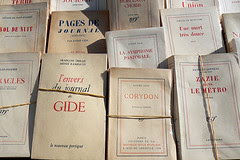