Liberals Who Hate Judges
Reading up on judges and the courts over the past few days, I've noticed that there's been a growing trend in recent years for liberals to speak out against judicial review, i.e. the power of the Supreme Court to invalidate state and federal laws on constitutional grounds.

Off the top of my head, Mark Tushnet, Robin West, Mary Becker, Michael Klarman, maybe even Cass Sunstein have all been skeptical of the courts' ability to advance progressive goals, especially in the economic sphere. (As Sunstein puts it, the judiciary tends to uphold "status quo neutrality" rather than enforce things like welfare rights.) Historically, of course, this has usually been the case—in the Progressive era, the courts were the major obstacle to change—and there was a brief uptick in progressive court-mongering during the Warren Court, but that was something of an aberration. At the very least, regardless of what you think of judicial review, it's safe to assume that a Warren-esque Supreme Court isn't going to be in the cards for the foreseeable future. 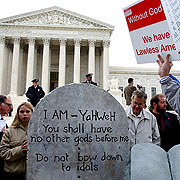 Anyway, I'm far decided on the issue, but since I do have the occasional anti-judicial review outburst, I'll sketch out some of the arguments here. Yes, disdain for the courts puts me in the camp with Tom DeLay and the wingnuts over in the picture. Life is weird. I should also say that, barring an unlikely constitutional amendment—for instance, one that allowed Congress to override judicial decisions by a three-fourths majority—there's not really anything to be done about judicial review. (I assume that the Supreme Court isn't going to wake up one day and say, "Oops! Well it looks like we've up and arrogated way too much power for ourselves these past 200 years. Sorry!") The best that can be said is that, if enough people start questioning judicial review, judges—who cater to popular sentiment more than we like to think—may start showing more deference to legislatures. Perhaps!

Anyway, one of Tushnet's big arguments against judicial review is that the courts, by taking constitutional matters into their own hands, have essentially prevented the public from taking an interest in the Constitution—junk judicial review, and we'd have a broader public debate about these matters. Eh, maybe; those sorts of arguments always seem plausible-yet-ethereal to me. One could also say that legislatures usually adhere closely to the Constitution anyway, and they would adhere even more closely if they weren't able to palm off the hard decisions to the courts. Again, who knows?

The better liberal argument against judicial review is Sunstein's—historically legislatures have been much better at enacting progressive change than courts. Again, the Warren Court is an exception, and shouldn't be leaned on too heavily. This seems to be true globally too: I've been leafing through Ran Hirschl's Towards Juristocracy, and it seems that courts in other countries haven't been very effective at enacting progressive economic change, either. (And courts in other countries usually have far more latitude to do so—though that's another post.)

Another argument for "Taking the Constitution Away from the Courts," that I think Tushnet underplays, is that the courts—and not just the Supreme Court—often make law in an extremely ineffective and clumsy manner. Of all the arguments, I like this one the best. First off, yes, it's perfectly "legitimate" for courts to make law—the Constitution is a vague and fuzzy beast, with vague and fuzzy clauses like "equal protection," and inevitably in the course of interpretation, the courts are going to make new law. Such is life. There's nothing a priori illegitimate about that. But there are other problems.

The term "impact litigation" refers to rulings that actually enact some widespread social change. Roe vs. Wade (legalizing first-trimester abortion) and Brown vs. Board of Education (ruling against school segregation) are the famous blokes here, but you also rulings as "tiny" as suits against gun and tobacco companies that resulted not only in settlements, but in real changes. We now have more safety locks on guns in large part because of litigation, instead of legislation.

Now all these decisions seem just fine and dandy to a liberal, but consider. The problem with courts making law is that judges generally aren't always qualified to do this sort of thing. Judges see evidence, the courts follow specific procedures. They can't take into account the vast technocratic expertise available on any given topic. Is it really the case that judges are experts on segregation in prisons, music distribution software, pornography, school prayer, campaign finance, etc. etc.? No, of course not. Changing the law often creates as many problems as it solves, and it takes serious finesse to anticipate all sorts of ill side-effects that come with enacting social change. The courts are terrible at doing that, and as a result, have ended up making terribly clumsy laws—from forcing mental institutions to turn out their patients and creating homelessness, to sequestering black politicians in their own special districts, to various safeguards in juvenile courts that have had bad effects—that have had all sorts of unintended consequences.

The most famous example, of course, is Brown vs. Board of Education, which a number of liberal scholars have recently been deriding as a ruling that didn't change anything about segregation per se (although it had other important effects). I've been reading Michael Klarman's excellent book, From Jim Crow to Civil Rights, and Klarman (a judicial-review skeptic) notes that a decade after Brown, 98 percent of African-American schoolchildren in the South still attended segregated schools. The Court simply didn't have the tools to force the change. That doesn't seem very surprising—courts can only do a couple of ham-fisted things to make people do things: either punish violators or make people pay money. Very ham-fisted. Real desegregation only began when the Civil Rights Act passed in 1964 and state and federal agencies were given specific powers to actually do something.

Of course, that's less an argument for getting rid of judicial review than it is to enjoin liberal reformers to please, please stop using the courts to enact any and all social change. And I say this not because "impact litigation" often creates a backlash. You usually hear that argument trotted out—for instance, that Roe vs. Wade created the rise of the "values" evangelical movement—but that's not a big concern to me. Most judicial decisions that enact sweeping social change end up creating their own legitimacy. School desegregation, or Miranda rights, are virtually unquestioned today, even though they were controversial decisions at the time. That, and not the Roe example, seems to be the norm. The backlash usually doesn't happen.

No, the bigger problem with relying on the courts is that, as mentioned above, the outcomes are usually far different from what reformers actually intended. It's depressingly great fun to read about Common Cause, the advocacy group that went to the courts to get a favorable ruling on campaign finance, and ended up with Buckley v. Valeo, which protected campaign cash as "free speech," and basically imploded any hope for real campaign finance reform. Common Cause has been fighting the decision ever since. You usually don't get the reform you want going through the courts, and if you do, it's likely to cause as many problems as it solves.

Um, so I actually argued two things: the liberal case against judicial review, and practical reasons for liberals not to enact social change through the courts (or at least be selective about it!). I should say, though, that I'm not convinced that judicial review is as bad as all that, and in another post I'll try to mount a defense. Otherwise, fire away!