No Love for the Polygraph
Apparently, CIA investigators found out that Mary McCarthy was the one who leaked information on the agency's secret prisons by hooking her boss up to a lie-detector test. Or rather, that was part of the investigation process—it's not clear that the polygraph itself actually helped uncover anything. Mark Kleiman has all the substantive commentary anyone could hope to have on the larger story here; I'd rather talk about the polygraph itself. 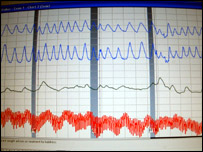 Do these things actually work? The National Academy of Sciences tackled this question back in 2002, in a study that seems to have a definitive air about it. Polygraphs are used in three basic situations: Ferreting out specific information about specific events (i.e., after a crime), employee screening, and pre-employment screening. As far as ferreting out specific information, the NAS found, polygraphs "can discriminate lying from truth-telling at rates well above chance, though well below perfection." Good, not great. For the latter two purposes, it's not so good (more on that in a bit).

But it's very, very far from perfect. If a "security threat" is smart, according to the NAS report, and knows how to beat a polygraph, he or she often can. Aldrich Ames passed two CIA polygraph tests before he was caught. What's more, most experts don't even seem to share the NAS' (very limited) confidence in the polygraph for any purpose. Only 36 percent of experts in a 1997 survey in the Journal of Applied Psychology thought the test was based on "sound psychological principles." And the Supreme Court ruled in 1998 that polygraph evidence can't be used in court because "there is simply no consensus that [it's] reliable."

Most of the time, the polygraph seems to work only because people think it's effective and confess to crimes or indiscretions before taking the test; a Pentagon study concluded that the bulk of its information at security screenings comes before anyone gets strapped in. On the other hand, the test's deterrence value seems low; leaks in the CIA increased during the '90s, despite increased use of the test. Unfortunately, as the NAS points out, no alternatives have outperformed the polygraph, so it's still widely used.

Steven Aftergood had an interesting column in Science back in 2000 arguing that the polygraph—which was increasingly being used at nuclear laboratories—had less to do with security and more to do with "exercising political control through intimidation" over nuclear scientists. Someone else can answer whether that's what's going on in the CIA now that "dozens of employees" have been given "special polygraphs" since January as Porter Goss cracks down on anti-Bush sentiment in the agency.

Anyway. Another related—and quite serious—problem with polygraphs, it seems, is the fact that the test is still used to do pre-employment screening in the government. For this sort of screening, the NAS found, the lie-detector test is extremely unreliable, since the questions being asked tend to be less specific and involve more ambiguity. ("Have you ever passed along classified information?" etc.) That's why Congress passed the Employee Polygraph Protection Act in 1988, making it illegal for private employers to subject employees to polygraphs, after hearing testimony that over 400,000 workers had wrongly flunked the test and suffered as a result.

But the law exempted government agencies: The CIA, the FBI, not to mention hundreds of state and local agencies, all use the polygraph as part of the hiring process. And a lot of people get disqualified because of it—many presumably wrongly. There's a whole website, antipolygraph.org, where people complain about having their careers derailed by an inaccurate lie-detector test. (An applicant who was simply and understandably nervous about being tested could easily fail the test, for instance.) In 1997, the FBI estimated that 20 percent of its applicants are rejected because of their polygraph results—and those people then have trouble finding government employment anywhere else—despite the fact that it's known to be inaccurate. Still, for whatever reason, people have a lot of faith in it.