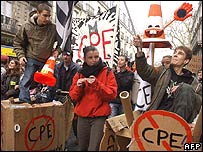 I don't really know whether the riots in France are going to create a political crisis in Paris or what, but I do know I'm not quite convinced by the "sensible" view on this side of the Atlantic that France absolutely needs to make it easier to fire young people if it wants to reduce unemployment. Of particular interest is this 2004 paper put out by researchers at the Center on Economic Policy Research which looks at evidence from the OECD countries and finds no evidence that, in general, "employment protection" laws have much impact on unemployment rates. (The paper also criticizes a much-cited IMF study that found just such an impact.)

That doesn't make a ton of sense at first glance—intuitively, one would think that if companies could fire people more easily, they'd be more likely to hire people in the first place—but then again, if employment is mostly determined by overall demand for goods and services, then maybe regulations governing the hiring and firing employees don't matter all that much in the grand scheme of things. The European Central Bank has been keeping interest rates rather high over the past few years, and maybe that does more to explain France's high unemployment.

It's interesting that other European countries have high levels of employment protection, yet still manage happily low levels of unemployment—Denmark, Austria, the Netherlands. Perhaps deregulation's not the answer after all. The CEPR paper argues that, for instance, changes to labor market institutions probably "contributed nothing at all" to the drastic reduction in unemployment in Ireland between 1980 and 1998. Meanwhile, Olivier Blanchard and Thomas Philippon argue that the main reason for a similar fall in unemployment in the Netherlands during that period was a national agreement by Dutch unions to moderate their wage demands—and not deregulation per se. So I don't necessarily see conclusive evidence that European unemployment is high because labor laws are too "rigid" and "inflexible."

Now all that said, granted, in this particular case, Chirac's latest proposed revision to the labor reform—instituting a one-year trial period during which companies could fire young workers with just cause—doesn't seem very draconian or unreasonable. Then again, I don't follow French politics very closely, and if, say, people are looking at this as a potential first step on the march towards creating a more "flexible," American-style labor market in France, I can see why they'd oppose it. And they should.

MORE: This DailyKos diary is worth a read, noting among other things that the true unemployment rate among French youths is greatly exaggerated—although I think the author's neglecting to count people who are discouraged from finding jobs—and that the rate of job creation and destruction in France is the same as in the United States. One can also add that in any case the originally-proposed reform would let employers fire workers for race- or gender-related reasons. Don't we have laws against even that here in the "dynamic" ol' U.S. of A.? [UPDATE: Oops, that last point isn't quite right; see comments.]