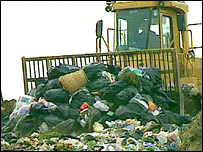 I've never known anyone who was objectively pro-litter. Litter's awful. It's disgusting. We're all agreed. But it seems that the nationwide anti-litter campaign, which began in the 1950s, was a bit less pure in its origins. According to Heather Rogers' Gone Tomorrow: The Hidden Life of Garbage, the entire anti-litter movement was initiated by a consortium of industry groups who wanted to divert the nation's attention away from even more radical legislation to control the amount of waste these companies were putting out. It's a good story worth retelling.

After World War II, the story goes, American manufacturers were running at full blast, and needed American consumers to keep buying more and more junk if they wanted to maintain their profit margins. And since there's an upper limit to how much junk a given family genuinely needs to own, manufacturers had to figure out how to convince consumers to keep throwing their existing stuff out, so that they would buy new stuff.

In part, that meant companies had to ensure that in a few short years consumer goods would become either unfashionable (advertising can do that), or obsolete (simply stop offering customer support for anything a few years old), or broken (like the non-replaceable batteries in iPods that wear out after two years). Giles Slade describes some of these strategies in his book, Made to Break, and they're techniques that have existed for decades now. But another way to ensure that factories could keep churning out junk was to introduce "non-renewable" packaging for products—for instance, the aluminum soda can—that could be produced, trashed, and then produced again.

The problem is that all of this endless—and needless—manufacturing creates a lot of garbage and pollution that generally wreaks havoc on the earth. (Packaging currently accounts for one-third of all trash in the United States today.) And eventually people wised up to this fact. In 1953 Vermont passed a law banning "throwaway bottles," after farmers complained that glass bottles were being tossed into haystacks and being eaten by unsuspecting cows. Suddenly, state legislatures appeared poised to pass laws that would require manufacturers—and the packaging industry in particular—to make less junk in the first place. Horrors.

So that's where litter comes in. In 1953, the packaging industry—led by American Can Company and Owens-Illinois Glass Company, inventors of the one-way can and bottle, respectively—joined up with other industry leaders, including Coca-Cola and the Dixie Cup Company to form Keep America Beautiful (KAB), which still exists today. KAB was well-funded and started a massive media campaign to rail against bad environmental habits on the part of individuals rather than businesses. And that meant cracking down on litter. Within the first few years, KAB had statewide antilitter campaigns planned or running in thirty-two states.

In essence, Keep America Beautiful managed to shift the entire debate about America's garbage problem. No longer was the focus on regulating production—for instance, requring can and bottle makers to use refillable containers, which are vastly less profitable. Instead, the "litterbug" became the real villain, and KAB supported fines and jail time for people who carelessly tossed out their trash, despite the fact that, clearly, "littering" is a relatively tiny part of the garbage problem in this country (not to mention the resource damage and pollution that comes with manufacturing ever more junk in the first place). Environmental groups that worked with KAB early on didn't realize what was happening until years later.

And KAB's campaign worked—by the late 1950s, anti-litter ordinances were being passed in statehouses across the country, while not a single restriction on packaging could be found anywhere. Even today, thanks to heavy lobbying by the packaging industry, only twelve states have deposit laws, despite the fact that the laws demonstrably save energy and reduce consumption by promoting reuse and recycling. (A year after Oregon passed the first such law in 1972, 385 million fewer beverage containers were consumed in the state.) And no state has contemplated anything like Finland's refillable bottle laws, which has reduced the country's garbage output by an estimated 390,000 tons. But hey, at least we're not littering.

So it's a nifty judo throw, as far as it goes. I'm guessing that much the same thing is behind industry promotion of recycling. Again, no one can be "against" recycling. It's very good. But of the three suggestions in the phrase "Reduce, Reuse, Recycle," the last is the practice least effective in curbing the manufacturing of junk. And that's exactly why, during the environmental movement's peak in the 1970s, the industry-funded National Center for Resource Recovery—which was founded by none other than Keep America Beautiful—lobbied state and national legislators to favor recycling as the means to address concerns about rising tides of garbage. It beat forcing people to "reduce" or "reuse."

The catch is that recycling can probably only do so much to limit garbage production. As Rogers' book points out, many materials can't be recycled too often before it gets junked, and a vast amount of material marked for recycling simply gets trashed anyway, or is sent overseas to be dumped. Recycling certainly has very considerable upside, not least of which is that recycled stuff requires vastly less energy to create than making new junk from scratch, but it's only a partway solution to reducing the 230 million tons of trash generated by this country each year, if that's what people think should be done. A longer-term solution is to stop creating so much junk in the first place. Essentially, though, that's what ideas like litter prevention are meant to obscure.