The Cost of Superfund Neglect 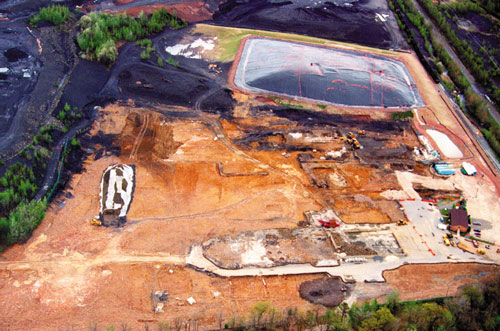 The 8,000 residents living in the town of Glen Avon, California, are lucky; they get to live right next to a 17-acre toxic waste dump:

[The Stringfellow site] served as a hazardous waste disposal facility from 1956-1972, accepting over 34 million gallons of waste from metal refinishing, electroplating and pesticide manufacturing companies. This waste was dumped into surface evaporation ponds. Rainfall caused the ponds to overflow, sending streams of heavily polluted water into nearby neighborhoods. The population of the census tract around the site is 52 percent minority and has a median household income of $43,000.

And no one's cleaning it up. Then there are the 6,491 residents of Montgomery County, Ohio, who live near North Sanitary Landfill. Decades ago, engineers decided that the best way to dispose of liquid industrial waste was to pour it on top of ordinary household garbage, thinking that the garbage would soak up the liquid like a sponge and hold it in place. But then they realized that the landfills started leaking all that toxic liquid, and instead of keeping it in place, the garbage—which covered hundreds of acres—just spread it around:

[T]he 102-acre North Sanitary Landfill sits atop an aquifer used for drinking water, which is composed of highly transmissive sands and gravel. Portions of the site have caught fire several times. It is located in a census tract with a median household income of $25,000.

Again, no one's cleaning it up. Those sites are two of the thousands of toxic waste facilities on the Superfund National Priorities List (NPL), created by Congress in 1980—a short while after Love Canal, a town built atop a toxic waste dump, was discovered by the media. Polluters responsible for sites on the NPL were required to clean up their messes or face steep penalties, and a government-run "Trust Fund," financed by taxes on the heaviest-polluting industrial sectors, was set up to pay for cleanup at sites where the companies responsible couldn't do so.

Since then, of course, Republicans have gutted the Superfund program. In 1995, Congress allowed Superfund taxes—which generated $1.5 billion a year (2 percent of the profits earned by the top six oil and petrochemical companies alone in 2005)—to expire, at the behest of industry lobbyists. Under George W. Bush, the EPA has not only abandoned the principle of forcing polluters to pay to clean up "orphan sites," but it has slowed the pace of cleanups. The number of completed Superfund cleanups fell abruptly, by 50 percent, starting in 2001. Lots and lots of toxic waste sites have been neglected.

That's all been reported before. But now the Center for American Progress has recently come out with a 182-page report describing, in gory detail, the 50 worst NPL sites that have been neglected due to the gutting of Superfund. The above descriptions come from that report. Between 200,000 and 800,000 people live within a mile of these toxic sites, and are exposed to chemicals in the air and soil. Perhaps needless to say, those people are disproportionately low-income and minority. When people talk about "environmental racism," this is what they have in mind.

Most glaring of all, many of the sites have languished on the NPL even though a responsible party has already been named—often a viable, profitable businesses that could certainly afford to clean up its mess. For instance, a 75-acre toxic waste site in Bergen, NJ, where 4.5 million gallons of liquid waste were dumped in unlined lagoons, is owned by Honeywell, which made $1.2 billion in profits last year. But nothing has happened because the EPA under Bush won't enforce a cleanup.

Now, as I understand it, the main argument against Superfund is that many companies are already cleaning up their messes—70 percent according to the Bush administration—and shouldn't have to contribute to the Trust Fund that pays for cleaning up "orphan sites." This seems weak to me. It makes perfect sense that industries that have benefited by and large from cheap disposal practices over the years should pay to clean up "orphan sites." Who else should pay for it?

And it's also worth noting that many of these companies are "voluntarily" cleaning up their toxic waste only because of the threat of litigation by the EPA, which charges responsible parties triple if the agency has to clean up the mess itself. And those litigation threats are in turn financed by… the Superfund Trust Fund. If there was no Superfund, you wouldn't see nearly as much "voluntary" cleanup. Anyway, the cost of neglect has been extraordinarily high, and though it's a bit dry, the CAP report does the best job I've seen of laying that out.