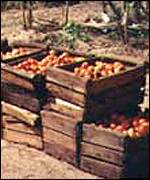 Writing in the Nation, Liza Featherstone tries to think through the implications of Wal-Mart's entrance into the organic food market. One potential fear she neglects to mention is that the store could one day start lobbying the Department of Agriculture to weaken standards on what can actually be sold under the organic label. That's hardly an idle fear: the USDA has long favored agribusiness as a rule—take, for example, its regulations that allow milk from cows cramped in tiny feedlots to be considered "organic". (Advocacy groups have pointed out that when most people think of organic milk, they think of cows allowed to graze out in the pasture, but the USDA has rebuffed their suggestions.)

And Wal-Mart, as one would expect, will inevitably exploit whatever loopholes do exist. Featherstone notes that Wal-Mart now gets its organic milk from Horizon Foods, a company that provides cheap milk by cramming its cows in factory farms in Idaho. Meanwhile, family-scale farmers, who are less likely to cut corners and have more incentive to treat the land better—in other words, the ideal "organic" farmers"—may well get priced out of the organic market altogether. Often, for instance, it's too much money and effort to even get certified by the USDA in the first place.

Another concern is that Wal-Mart will manage to defeat the whole purpose of organic food—helping the environment and all that jazz—by contracting with farms in countries far, far away. Transporting food long distance uses up a stunning amount of energy—food in the United States today typically travels about 1,500 miles to reach our plates, up 25 percent from 1980. According to Featherstone, industry observers think that much of Wal-Mart's "organic" food will come from Chile, Kenya, and China. (On the other hand, China may have to clean up a lot of its groundwater in order to set up organic farms, so it's not all bad.)

So… who knows how this will all shake out. I'm pessimistic. Sure, Wal-Mart has promised to behave itself, but that means about as much as you'd expect it to mean. Wal-Mart's whole strategy is to slash prices by outsourcing many of its costs onto other entities—the environment, say, or its workers. The idea behind organic farming, by contrast, is to make the consumer pay all of those costs, since cheap products aren’t cheap when others are shouldering the cost. Expecting that these philosophies can happily coexist seems improbable, to say the least.