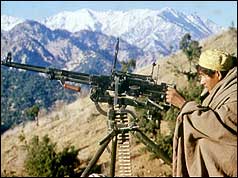 Thanks to the colossal cock-up in Iraq, virtually no one has taken a hard look at the flailing occupation of Afghanistan and asked whether, in retrospect, it was also a mistake to invade that country. No one asks that. Afghanistan's the ultimate uncontroversial war—even liberals point to it approvingly to show they're not reflexively dovish. But Stephen Zunes is right—the Afghan war's not going that well, Osama bin Laden has eluded capture, and second-guessing the various decisions made back in 2001 to go to war really shouldn't be out of bounds.

After September 11 of course, the United States had to deal with al Qaeda in the short term, no matter what happened next. I remember reading, in various European newspapers at the time, about talk of a deal with the Taliban to extradite bin Laden and his associates. That fell through. But why? Was it because Mullah Omar had married bin Laden's daughter and wouldn't hand over his friend? Was it because the United States wanted to go to war come what may? And if so, why?

Some reports indicated that the Taliban had agreed to extradite bin Laden to Pakistan, but the United States killed that deal. Jason Burke's book on al Qaeda reported that after the embassy bombings in 1998, the Taliban was also ready to rid itself of bin Laden, but after Clinton ordered a missile strike on Afghanistan, the Taliban, obviously embittered, changed its mind. If that's true, it sounds like the Taliban leadership was never thrilled with bin Laden, but had too much pride to bend to U.S. browbeating. Perhaps if an International Criminal Court had been in place in 2001, that would've been an acceptable compromise. We'll never know, obviously.

Of course, perhaps the United States had good reason to turn down these offers. Afghanistan, after all, was a terrorist haven—with training camps and everything—and getting bin Laden alone might not have been enough. But is this true? Some reports suggested that most al Qaeda fighters in Afghanistan, circa 2001, basically existed to fight the Northern Alliance. Were they a threat to the United States? I don't know. Moreover, would enhanced police and intelligence operations around the world, in conjunction with political pressure on the Taliban, have been just as disruptive to al Qaeda as an invasion was?

And even if war was the best option for disrupting al Qaeda at the time, was an air war and occupation really the best way to disrupt that terrorist haven? Zunes mentions a couple of other possible options that might have been pursued—exploiting divisions within the Taliban to bring down the government (many Taliban members reportedly resented al Qaeda's presence) and arming the Northern Alliance, or, if we absolutely had to go in, focusing on "precisely targeted small-unit commando operations" rather than "high-altitude bombing." Has anyone studied this? Why not?

A cynic would say that, after September 11, the Bush administration needed to do something dramatic—perhaps partly for public consumption. As Thomas Friedman said, "after 9/11 the United States needed to hit someone in the Arab-Muslim world." There was some psychological need to smash shit up. I mean, sure I think that attitude's sick and twisted, but it appeared to be fairly widespread. Political pressure and covert operations wouldn't have satisfied the masses. A dramatic air war was just the thing. Any administration, Democratic or Republican, would've understood that, I think.

At any rate, we got an air war and an invasion of Afghanistan. It didn't really stabilize the country, and what advances in human rights were originally made have been largely rolled back in parts of the countryside—some aid workers are now saying security was actually better under the Taliban. On the downside, our policy of torturing and abusing detainees sprung from that war, a number of civilians died, the opium trade is flourishing once more, warlords are running the country again, and the war, while not as unpopular as Iraq, certainly didn't win the United States many admirers in the Muslim world.

One could throw many of these problems at the feet of the Bush administration, which sanctioned torture and didn't pay enough attention to reconstruction, distracted as it was by preparations for toppling Saddam Hussein, and all that other stuff. I don't really know how to untangle these things. A more competent administration might have had better luck capturing bin Laden and stabilizing the country. Or perhaps completely different policies would've achieved much more. I certainly don't know for sure, but it seems worth asking all the same.