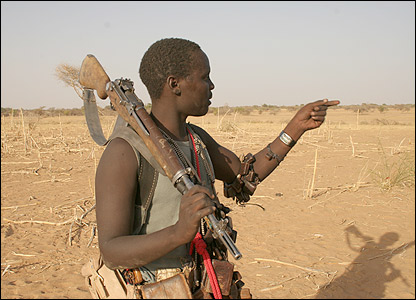 Via Crooked Timber, Alex de Waal, who certainly knows a thing or two about Darfur, argues that a military intervention to halt the ongoing conflict there would be a terrible idea:

The knock-down argument against humanitarian invasion is that it won't work. The idea of foreign troops fighting their way into Darfur and disarming the Janjaweed militia by force is sheer fantasy. Practicality dictates that a peacekeeping force in Darfur cannot enforce its will on any resisting armed groups without entering into a protracted and unwinnable counter-insurgency in which casualties are inevitable.

The only way peacekeeping works is with consent: the agreement of the Sudan government and the support of the majority of the Darfurian populace, including the leaders of the multitudinous armed groups in the region. Without this, UN troops will not only fail but will make the plight of Darfurians even worse.

I've heard arguments both ways on this score, and don't know nearly enough about the country to figure out which one is correct. Eric Reeves, who has done a lot of work charting the humanitarian catastrophe in Darfur, seems certain that both the Khartoum-backed militias and the Darfur resistance groups would basically drop their guns at the first sign of Western military might (or at least after a moderate amount of fighting) and thereby put an end to this war. Problem solved. The political issues that led to the conflict can be hashed out later.

Trouble is, that didn't exactly work in, for instance, Somalia. Now not all situations are equal, granted, but if the janjaweed didn't disarm quietly, it would be very difficult for the West to dole out humanitarian aid in Darfur while waging what might amount to a counterinsurgency campaign. The rebel groups, no angels they, might continue to wage an insurgent war against the central government. And a Western force might be ill-equipped to settle a number of issues driving the conflict—would the West be in charge, say, of handing the lands seized by janjaweed militias back to dispossessed Darfur tribes? By force? One begins to see why de Waal thinks all this "philanthropic imperialism" could make things worse, not better.

Of course, the intermediate case is that a Western intervention proves fairly bloody and gruesome, but not quite as bloody and gruesome as the status quo, and hence is worth doing. That sounds entirely likely. But De Waal suggests that the safest option, at this point, is to focus on reviving talks between the central government and the two rebel groups that haven't signed onto the failed May peace accords. (To a large extent, after all, the ongoing slaughter is due to a political conflict, not some irrational desire by Khartoum to kill every last Darfuri; that doesn't make the violence more palatable, but it does mean that it could be stopped with a properly-structured peace accord.)

Maybe de Waal's right about the prospects for military intervention, maybe he's not. The way I see things, it doesn't matter. Practically speaking, neither the United States nor Britain nor France nor anyone else will send troops in anytime soon. So at this point, idle saber-rattling probably doesn't accomplish much beyond undermining the resumption of peace talks—which sound, at this point, like the only realistic option for stopping the slaughter. (Continued U.S. threats to intervene might, for instance, actually embolden the Darfur rebel groups to continue fighting in the hopes that the West will, in fact, intervene at some point and help them get the independent state some leaders apparently want.)