Be Nice and Share
Bill McKibben spins horror stories in the New York Review of Books about how the world is burning thanks to climate change and it's rapidly becoming too late to halt the process. I happen to think he's right, but mostly I wanted to quote this part: 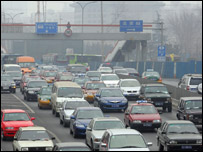 Kelly Sims Gallagher, one of the savviest early analysts of climate policy, has devoted the last few years to understanding the Chinese energy transition. Now the director of the Energy Technology Innovation Project at Harvard's Kennedy School, she has just published a fascinating account of the rise of the Chinese auto industry. Her research makes it clear that neither American industry nor the American government did much of anything to point the Chinese away from our addiction to gas-guzzling technology; indeed, Detroit (and the Europeans and Japanese to a lesser extent) was happy to use decades-old designs and processes.

"Even though cleaner alternatives existed in the United States, relatively dirty automotive technologies were transferred to China," she writes. One result is the smog that is choking Chinese cities; another is the invisible but growing cloud of greenhouse gases, which come from tailpipes but even more from the coal-fired utilities springing up across China. In retrospect, historians are likely to conclude that the biggest environmental failure of the Bush administration was not that it did nothing to reduce the use of fossil fuels in America, but that it did nothing to help or pressure China to transform its own economy at a time when such intervention might have been decisive.

Much of China's auto industry consists of joint ventures between foreign auto-makers and Chinese companies. American firms, from what I gather, have been reluctant to share pollution-control technology with their Chinese counterparts primarily because of China's weak intellectual property protections. And Chinese companies, for their part, are not at the point where they can develop the technology themselves. Gallagher has also noted elsewhere, I think, that foreign companies actually did begun sharing once China started putting bare-bones environmental standards in place. For years, though, there were no incentives and China built a lot of dirty cars—and power plants, and factories, and lord knows what else.

So now China's spewing more and more greenhouse gas, and at some point, it will be too late to reverse things, if it isn't already. The country already emits roughly two-thirds the greenhouse gases that the United States does. China burns through about 40 percent of the world's coal output, which accounted for 80 percent of its carbon emissions. This year alone the Chinese will build around 80 gigawatts worth of power plants—more than the entire output of the United Kingdom. Coal-burning plants last for 30 or 40 years. Change can't really wait. The same, obviously, goes double for the United States.

By the way, this was my favorite passage from the McKibben piece: "[T]he testimony of Lovelock, Hansen, and the rest of organized science makes it very clear that it would be a wise investment, indeed the wisest possible investment, to spend large sums of government money to hasten this transition to solar power. Where should it come from? One obvious candidate is the Pentagon budget, now devoted to defending us against dangers considerably less threatening than climate change."