Big Problems, Microsolutions
Microcredit. It's big, we hear. Mohammed Yunus, the "godfather" of microfinance, just won the Nobel Peace Prize. The whole thing involves making small loans to the poor, who generally have no access to credit, so that they can become entrepreneurs and bootstrap themselves out of poverty. It's supposedly ultra-effective, beloved by both lefties and righties. This week's New Yorker, in fact, has a long feature on microfinance, and I wouldn't link to it if I didn't think it was worth reading. So... let's excerpt: 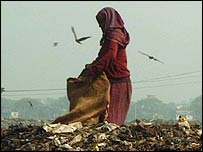 In the eighties and early nineties, the Grameen Bank received close to a hundred and fifty million dollars in soft loans and grants; today, funded by savings deposits from borrowers and others, it essentially supports itself. It has disbursed more than $5.3 billion to nearly seven million borrowers who have no collateral; ninety-six per cent of them are groups of women, who meet once a week and, through incentives, help to insure their individual loan repayments. (Traditionally, Third World banks lend only to men. Yunus says that he developed the policy of lending mainly to women not only because they were more responsible about re-paying the loans but because families benefitted more when the women controlled the money.)

To cover the high cost of servicing these small loans, borrowers pay interest rates of up to twenty per cent, and Grameen claims that it recovers ninety-eight per cent of the loans. Some of Grameen's numbers have been challenged, but no one disputes Yunus's assertion that, contrary to traditional banking doctrine, the poor can be reliable borrowers, even at high rates of interest. These days, Yunus raises money for the Grameen Foundation, a global nonprofit group that supports microcredit institutions around the world. Many are related to the Grameen Bank, but only loosely; Yunus believes in locally designed, run, and controlled institutions.

As microcredit has changed in the past thirty years, achieving broad recognition and even some early commercial success, Yunus has modified his methods, but he has never wavered from his goal. He insists that microcredit can lead to a world in which poverty has been extinguished and that eventually, as he puts it, there will be "poverty museums."

As Connie Bruck reports in the piece, various microfinance masterminds are now debating whether these banks should exist as non-profits, and preserve their mission of helping to lift the poor out of poverty, or become financially self-sufficient, with all that entails. The debate's rather nuanced, and Bruck gives the full flavor. On a more general note, though, it seems to me that microfinance has been a bit oversold as a poverty-reduction strategy. And it's certainly been oversold as a path towards economic development. Perhaps dangerously so. But other than that, it's great.

Gina Neff wrote a pointed critique of the Grameen Bank back in 1996 for Left Business Observer, noting that 55 percent of lenders were using their loans to meet their basic needs rather than invest in businesses and become entrepreneurs. In other words, microcredit was helping many poor households survive rather than better their lot. That's valuable, but presumably traditional safety-net programs could perform that function better than microloans. The danger occurs when development experts start proposing microcredit as an alternative to traditional safety nets, which some neo-liberal types have certainly done.

Many experts take for granted that microcredit always empowers women. In many cases it quite obviously does—Bruck offers some heartening examples of women using microloans to start their own businesses and gain financial independence. One study has found that women who join credit associations enjoy greater respect and lower rates of domestic violence. On the other hand, a much-cited 1996 survey by Anne Marie Goetz and Rina Sen Gupta found that, in Bangladesh, only 37 percent of women who received microloans had "full or significant control" over how the loan was spent. Most women merely act as collection agents—they're responsible for repayment, while the husbands spend the money. Results may vary from place to place, but microcredit can't, on its own, uproot patriarchal social structures.

On balance, though, despite various problems—and many of these problems may get ironed out as microlenders become more sophisticated—microfinance can greatly benefit the world's poor. (Although, as Bruck notes, some economists debate whether these lenders truly reach the poorest of the poor, and "commercial" microfinance institutions may prove worse on this score than non-profits like Grameen.) But, as development expert Thomas Dichter has written, what microfinance probably can not do is lead to "strong and flourishing local economies" in developing countries.

Say a woman in Malawi takes out a loan to buy a hammer so that she can set up a rock-smashing business—a typical microcredit success story. That may help her stave off extreme deprivation, but it won't turn Malawi into a developed country. That's certainly not how Europe or Asia became industrialized. Without massive state-driven investments in, among other things, infrastructure, legal institutions, health, and education, the markets in these countries will be too stunted for "entrepreneurs" with microloans to do much more than set up rock-smashing businesses or sell bananas on the side of the road. I really don't want to denigrate that, but as a poverty-reduction strategy, it's no substitute for proper economic development.