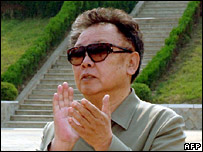 I don't know what should be done about North Korea any more than you do. But here are some articles on how things got to where they are. Fred Kaplan's "Rolling Blunder" explained how the Bush administration abandoned the flawed-but-basically-sound deal its predecessor had made with North Korea. (One can also note that it was the United States that originally cheated on the Agreed Framework—by never delivering promised light-water reactors, and by never taking promised steps towards normalization—long before North Korea resumed its illicit attempts at uranium enrichment.) That deal doesn't look half so bad now.

Beyond mere finger-pointing, the point is that diplomacy can work in these situations—although, as Peter Scoblic wrote in The New Republic two years ago, the Clinton administration had to combine diplomacy with the threat of force to get North Korea to agree to lock up its plutonium rods and let in IAEA inspectors back. It took more than flowers and candy. The current administration, by contrast, has done little but provoke Kim Jong Il—despite evidence that North Korea may actually want negotiations. Selig Harrison's article in the current Newsweek makes a strong case for more talk and less confrontation. He might be overly sanguine about the North Korean officials he's chatting with these days, but read his piece anyway.

In 2003, Robert Alvarez wrote that it was "very destructive to exaggerate North Korea's nuclear capability." Maybe he's still right. Michelle Malkin posted a map this morning showing the ranges of North Korea's ICBMs. Much of continental United States looks like it's in the crosshairs. But arms control expert Jeffrey Lewis noted a few months ago that the missile in question, the Taepodong 2, doesn't actually work. North Korea can't lob a nuke at Los Angeles for the time being. We also don't know how big a nuke they've actually tested. That won't stop the missile-defense cheerleaders from doing their thing, but unwarranted hysteria doesn't seem very helpful at this point.

Matt Yglesias revisits the debate about letting North Korea collapse. Nicholas Eberstadt has argued that U.S. food aid unwittingly propped up Kim Jong Il's regime during the 1990s, although the country's economy seems somewhat sturdier nowadays. At any rate, neither China nor South Korea really want North Korea to collapse. It would be chaos—refugees galore plus a proliferation nightmare. The current South Korean strategy—engaging its northern neighbor, exerting some measure of peaceful influence, and slowly building sweatshops across the border in the hopes that North Korea will eventually worship at the altar of capitalism and decide that there's more to life than waving their warheads around maniacally—has its own problems, but is still likely better than anything the White House will concoct at this point. What a mess.

UPDATE: Not that it really contradicts any of the above, but Jeffrey Lewis thinks the North Korea nuclear test might have been a dud...