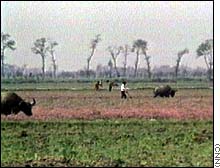 In Grist, Tom Philpott wonders if industrial agriculture can "withstand climate change." Or maybe it's the other way around. The modern-day food supply increasingly depends on lots and lots of fossil fuels. Food is grown further and further away, and requires more and more oil to get delivered to our kitchen tables. Wal-Mart's foray into the "organic" food market, ironically, may well accelerate this trend. Then there are all those petroleum-based pesticides. Once peak oil, or a carbon tax, comes into play, the fertilizer's going to hit the fan.

Climate change is just the tip of the iceberg. Industrial agriculture has certainly done a great deal of damage on a variety of fronts. Philpott discusses the well-known loss of biodiversity in various regions, thanks to Western plant breeders who have introduced "hybridized" strains that end up dominating once-diverse agricultural areas. "97 percent of fruit and vegetable seed varieties that were commercially available in 1907 had vanished by 1983." Some regions are now more prone to crop devastation as a result. All that diversity served a purpose besides just looking pretty.

Then there are grim side stories, like the "plague of suicides" in India. The problem has a lot of causes. Here's a sinister-sounding one: Monsanto sells genetically-modified seeds to Indian farmers. New crops flourish, require fertilizers and pesticides galore. Soon the land won't grow anything but Monsanto crops, which are twice as expensive. Farmers plunge into debt, despair, and then take their own lives. Read all about it in the New York Times—or in the lefty journals that have been waving their hands about this issue for years.

Come to think of it, the Times has done some truly excellent reporting lately on the dark side of modern-day agricultural practices. India, we learn, is "running through its groundwater so fast that scarcity could threaten whole regions… and ultimately stunt the country's ability to farm and feed its people." No exploration, though, of whether "water-guzzling" Green Revolution irrigation practices, or massive and often ill-conceived World Bank water projects, have intensified the problem. On the very significant other hand, some of these grand schemes have helped ramp up food production, staving off famines in the past (although that might not still be the case). But that doesn't mean there are no alternatives to the current state of affairs.