All Signs Point to Get Out
The grim CENTCOM briefing that got leaked to the New York Times today, the one in which the military admits that Iraq is sliding towards "chaos," is attracting all the headlines, but a number of reports and studies released lately have reached similar conclusions. For a good long while now I've been predisposed to the idea that Iraq is an unsalvageable mess, and that the United States should leave as soon as possible before it makes things even worse, but what the hell, I figured I'd read through some of those recent studies anyway and see what they had to say.

First up comes this report from the United States Institute of Peace, which, if I recall correctly, was one of the few think tanks that actually predicted the difficulties of the occupation—which, I guess, says more about the dismal state of D.C. think tanks than the infallibility of the USIP. Anyway, the institute got "twenty Iraq experts" together to try to imagine possible outcomes for the country. Here's the lone positive scenario they dreamed up: 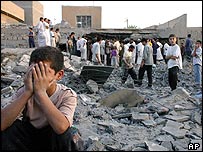 Shia and Kurdish leaders make concessions to the Sunni for the sake of preserving a chance for a unity government. The key concessions are agreements not to form a large Shia region, a more equitable distribution of oil revenues, maximization of production from current oil fields for the benefit of all, and relaxation of strict de-Baathification. Other major elements of the concessions are acceptance of an autonomous Kurdistan and recognition that Sunnis and Shia need each other to create any semblance of a united Iraq (or even Iraqi Arabistan). The parties find common ground in opposing the foreign fighters, who are on a mission of disruption.

A positive feedback loop is created when the UN mission returns in force and the World Bank offers substantive assistance. As conditions improve, the interest of investors increases.

As I said, that's the bright and sunny scenario. Of course, just a few weeks ago, Iraq's ruling Shiite alliance rammed legislation through parliament that will enable the creation of a semi-autonomous Shiite superstate in the south. Even though officials have agreed to postpone the implementation of the law for 18 months, and even though most Iraqis oppose partition, this state of affairs is so far removed from the "positive feedback loop" described above that the optimistic scenario doesn't even seem worth discussing any further.

So that leaves the various nightmare scenarios. The USIP report looked at a number of ways the disintegration of Iraq could occur. In one, Iraq undergoes de facto partition, as a "self-directed ethnic cleansing of the regions take place"—Sunnis move to Sunni-dominated regions, Shiites to Shiite regions, and so forth. It's bloody. The USIP recommends that, if this happens, the United States should retreat to "remote bases" and offer vague assistance to try to prevent Baghdad from resembling Beirut in the 1980s, and try to "improve the relative position of the Sunnis," so as to maintain a balance of power in Iraq. I very much doubt the U.S. could do any of this competently, but that's what the experts suggest.

At any rate, I'd say this scenario is already underway. Via Marc Lynch, a new Brookings paper by Ashraf al-Khalidi and Victor Tanner describes the "self-directed ethnic cleansing" going on right now, as various Iraqi sects consolidate their territory through internal migration: "people flee to areas where they feel safer". In his case for partitioning Iraq—as if the country was America's to break apart as it pleases—Peter Galbraith says that partition won't be too bloody, since cities such as Baghdad have already become effectively segregated. That doesn't seem to be the case yet, but things are certainly heading in that direction.

Now both Jim Fearon and Chaim Kauffman have said that the United States ought to stay in the region long enough for precisely this ethnic sorting to finish, so that when the Army does eventually leave—which won't come until 2008 at the earliest—the ensuing sectarian bloodletting will be somewhat less than if we leave immediately. Of course, as the Brookings paper details, much of the violence comes from armed militias and criminal gangs of the same sect fighting it out, a problem the United States is, arguably, exacerbating. Shiite regions won't suddenly become secure and stable just because there are no Sunnis around. And, Marc Lynch points out, some evidence shows that "greater territorial concentration of ethnic groups actually significantly increases the prospects for violence."

Fearon, who has studied civil wars in a number of countries, concluded in his congressional testimony last month that Iraq is headed towards political disintegration regardless of whether the United States stays or goes, and that the ensuing civil war could last up to a decade. Maybe we could get Iraq's neighbors to help keep things stable, although as the USIP's Iraq experts noted, that would require major concessions to Iran and Syria, and a complete reversal of six years of policy. No doubt we can all guess the likelihood of that.

Meanwhile, according to today's Los Angeles Times, Sunni insurgents are increasingly focusing their attacks on U.S. troops, rather than Shiites. Rush Limbaugh says they're just trying to get Democrats elected, those clever bastards. Or perhaps they really don't enjoy living under a bloody military occupation. Either way, I'm having difficulty finding evidence in any of the above reports that staying in Iraq will make things better. Maybe sharper-eyed readers will have better luck.