Block the Vote
Tomorrow, as we know, is Suppress the Vote Day, when political parties the country over—Republicans in particular—spend millions trying to keep people, especially minorities, from making their way to the voting booths and electing their representatives. It might seem like an odd tradition to some, but hey, at least it's never dull. In the September issue of Mother Jones, Sasha Abramsky listed some of the dirtiest tricks used in past years to prevent people from voting. Here's one gem, from 2004: 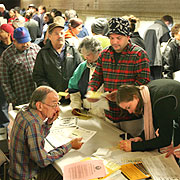 [In] Franklin County, Ohio, fliers purporting to be from the county Board of Elections announced that because of high voter registration, Republicans would be voting on Election Day, and Democrats would cast their ballots the next day; they ended with the inspired line, "Thank you for your cooperation, and remember voting is a privilege."

In the same county, a group of out-of-state Republicans known as the Mighty Texas Strike Force made phone calls from a hotel warning ex-prisoners that they could be returned to the slammer if they dared to vote, and reportedly telling other voters that their polling places had changed. Congressional investigators later discovered that the Ohio Republican Party had paid the Strike Force's hotel bills.

Their mothers must be so proud. This year, the media won't bother reporting that Republicans are calling people up in New Hampshire at 3 in the morning and pretending to be Democrats ("But John Kerry flubbed a joke!!!). In Arizona, meanwhile, new GOP-backed photo ID laws are making it difficult for people to register; Missouri voters are being forced to show IDs at the polls even though that requirement has been declared unconstitutional; and that's without diving into the buckets of bullshit slopped about, intended to deter minorities from voting. There's nothing clever or insightful to say about any of this except to point it out (oh, and volunteering to be a poll-watcher is a very good use of one's time).