Busting Up Wal-Mart
I've been meaning to write about Barry Lynn's Harper's piece on Wal-Mart for months now, and seeing as how I'm entirely burned out from doing election-related research at work (for what it's worth, my office pool predictions were very dire), now seems like a good time. As others have noted, Lynn makes the antitrust case for breaking up Wal-Mart, on the grounds that the retailer has used its inordinately massive purchasing power to create a monopsony that allows it to dictate terms to its suppliers and, among other things, forces manufacturers to slash their labor costs. It's a thoughtful piece and well worth reading. 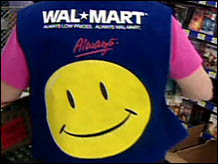 Lynn looks to the Sherman Antitrust Act of 1890 as inspiration for busting up Wal-Mart—he calls this the true "path of the free market." And indeed, Wal-Mart's striking ability to set terms for the economy resembles nothing so much as the old Soviet central planners. What strikes me, though, is that Lynn sounds much more like the progressives during the New Deal who railed against the Atlantic and Pacific Tea Company (A&P), whose efficiency and low prices threatened to destroy a number of family-owned and smaller businesses. I think there's a useful distinction to make here.

The Sherman Act had "efficiency" as its primary rationale—the fear that monopolies would become sluggish and survive purely by gouging customers. It wasn't until the New Deal that progressives started worrying about protecting smaller firms from larger, more efficient big firms. Among other things, thinkers such as Adolf Berle fretted about the effects of a few corporations dominating the political landscape and amassing too much power. The immediate result was the short-lived National Industrial Recovery Act, which allowed companies some measure of collusion to prevent the sort of price-cutting that was leading to a rash of bankruptcies.

The NIRA died a quick death at the hands of the Supreme Court, but the idea that government should regulate industry to control entry and exit, and fix prices, survived well through the New Deal. Regulations required utilities to sell their services for close to the price of production, while the Interstate Commerce Commission and Civil Aeronautics Board set prices for transportation. Stability and "fair competition" came at the expense of efficiency. The regulated firms in question, of course, could afford to pay above-competitive wages, coddled as they were by full-cost pricing and regulated entry.

One immediate effect was that the most heavily-regulated industries unionized the rapidly—a staggering amount of the growth in unionism can be attributed to this sort of government meddling in the economy (along with the nationalization of industry during World War II). By 1973, according to the CPS, private sector union density across mining, construction, durable goods manufacturing, transportation, and utilities industries—all heavily regulated during the New Deal and after—averaged 41 percent, as compared to the national average union density of 24 percent.

At any rate, the economic landscape has much changed since the early 1970s. The Carter administration began the deregulation of the airlines, transportation, utilities, and telecommunications. After Reagan broke the PATCO strike, businesses no longer had to fear the political fallout of hiring replacement workers—scabs—during strikes. (Even during the 1960s, Kennedy was wading into labor disputes, as when he forced U.S. Steel to agree to a wage hike without a corresponding price increase.) From an economist's point of view, the economy was becoming more "efficient," as free competition was allowed to flourish. But unions were dying en masse.

Wal-Mart is sort of the apotheosis of all these trends. As Charles Fishman's The Wal-Mart Effect describes, the retailer certainly makes parts of the economy hyper-efficient, forcing suppliers to wring the waste out of their production process (on the other hand, the stores monomaniacal quest for low prices does reduce the profit margins of its suppliers, which can stifle innovation and long-term corporate growth). That efficiency, however, drives down wages and forces companies to resort to ever more creative tactics to avoid unionization.

One could argue that if all these suppliers were unionized—say, if card-check legislation was enacted—that would act as a counterforce against the relentless drive to low prices. On the other hand, companies might just move to China, or find ways around card check (obviously that doesn't hold as strongly for the service industry). There's a bit of a chicken-egg problem here: In the past, it was essentially government-mandated inefficiency—serious industrial meddling that far exceeded the tweaks recommended by most liberal policymakers today—that allowed unions to flourish. We're talking price controls and nationalization of industry and the White House stepping in to mediate labor disputes, things very far from Lynn's modest vision of "freer" markets through antitrust law.

Economists might look at the movement away from New Deal industrial policy and say "good". But, of course, as nearly every liberal in the country is pointing out these days, all this "efficiency" gained since the 1970s mainly seems to be benefiting the upper classes, at least if you look at the way wage growth has been distributed. And even if, on balance, all this greater efficiency benefits consumers more than the accompanying loss of bargaining power hurts (some) workers—a debatable point—that's a purely economic issue. The shift in political power that has come alongside the decline of organized labor is, from a social-democratic view, much more troublesome.