Fish Farming
Not that I care to be preachy about it, but I first became a vegetarian after reading Julia Whitty's grim Mother Jones cover story about the death of the oceans. That particular fable had plenty of overarching morals, but for me the biggest was that meat-eating was unsustainable. The irony, of course, is that I never stopped eating fish or seafood—just cows, chicken, sheep, whatever waddles or grazes on land. And then I sort of stopped thinking about how the world's fisheries were being depleted. At least until I read a recent New York Times report about how Japanese chefs were starting to put horsemeat in sushi because they were running out of tuna. Oh, right. That. 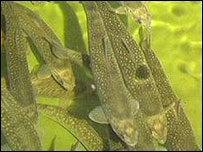 Now along comes Jeffrey Sachs to talk about how the oceans are being horrendously over-fished—by some counts, we may run out of fish in 50 years—and we need to put the oceans on a more sustainable path. (The link is via Reihan reloaded.) Enter aquaculture. Sachs likes the idea of water farms, where fish, shellfish, and other aquatic plants are grown for food. A great deal of salmon, shrimp, carp, catfish, and oysters are already being reared in various ponds and marine habitats. By some counts, aquaculture produces roughly 30 percent of the world's fish supply.

So does Sachs think we can avoid completely ransacking the oceans by ramping up aquaculture? That's what he implies. Of course, there are real problems with farming marine life. The waste from those farms—fecal matter, uneaten food, pesticides, herbicides, antibiotics—can turn the ocean floors into toxic sludge and do a number on the surrounding waters. The fish are often crammed in close quarters and end up breeding disease. Non-native species can escape the farms and wreak havoc—Atlantic salmon are now flopping all over the Pacific Northwest.

An example: In New Brunswick, salmon farms occupy about 0.1 percent of the regional coastal area, but scientists have looked at the surrounding areas and found lowered oxygen levels, invasive species, algal blooms, and the destruction of the nursery habitats for wild fish. It's a mess. Plus, as Sachs points out, many farmed fish species are carnivorous—herring are used to make salmon feed, so they've been heavily harvested in the wild, which in turn puts pressure on the oceans. (On the bright side, mollusk farming is truly excellent in just about every way. Really.)

Sachs seems aware of all of this, but then, sanguine as ever, waves away the problems by claiming that "better aquaculture technologies are already evolving rapidly," implying that, someday soon, fish farming will become sustainable on its own. I'd say there are other hurdles besides technological ones. In the U.S., for instance, there's no comprehensive oversight of the industry—it's governed by a patchwork of state laws, executive orders, and international treaties, and it's not always clear which ones apply to which aspects of marine farming. All the technology in the world won't help so long as there aren't laws to ensure sustainability. Isn't that a predictably liberal thing to say?

The Pew Center's invaluable report, "America's Living Oceans" (PDF) has a bunch of suggestions to promote sustainable aquaculture. National standards factor in heavily. International ones, too. Actually, as an overview of the broader issues problems facing the oceans, the Pew report is terrific. By the by, I should mention that I'm terrified of fish—in the way that some people are terrified of heights or speaking in public. That's another story. For now, the environmental crisis facing the oceans (which goes well beyond running out of tasty fish to eat) scares me more. And I can't tell if even Pew's favored policies would save the day at this point.