Liar, Liar
This is purely anecdotal, but most people, I've found, like to think of themselves as good liars. I once had a friend who was incapable of telling even the tiniest lie, but she was an exception (and she really could not do it—if she tried, say, to get out of dinner plans with relatives by pretending she had other plans, her voice would stammer, her face would redden, and she would, at last, have to confess the truth). Many people really do like to think they can mislead or deceive, and do it quite well, on demand. 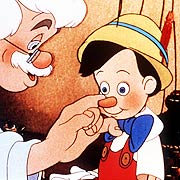 And the thing is, they're probably right. Margaret Talbot had a piece in The New Yorker last week about brain-scan technology, and whether it can help us create better lie-detector tests. (The lie-detector tests currently on offer—especially the polygraph—are notoriously unreliable, even though plenty of government agencies use them quite frequently.) But the takeaway lesson from the article, I'd say, is that people are terrible at catching others in lies on an everyday basis. In lab studies, subjects distinguish truth from lies only about 54 percent of the time—no better than chance. The brain is one of the worst lie detectors around.

That's partly, it seems, because people think they know what sort of behavior goes with lying: sweating, maybe, or anxiety. But not so! When people tell intricate lies, they sometimes pause longer and speak more slowly, although sometimes not. Liars often blink and fidget less—as if they're restraining themselves—but, again, sometimes not. When someone is telling a story that's true, he'll often interrupt himself or go back and correct things he said previously, or tell things out of order, or say, "Wait, wait, no! It was like this…" Liars do much less of that, especially if they've been rehearsing their alibi. But, of course, a scattered tale is more likely to arouse suspicion.

Then, of course, some behavior is just random. As Talbot recounts, one 1992 book, Practical Aspects of Interview and Interrogation, insists that liars tend to be "jerky and abrupt," with "cold and clammy" hands, and will do things like scrunching up Kleenex. But lots of people may act this way. I love scrunching up Kleenex. And outgoing people are assumed to be more truthful, even though there's no reason to think they are. The biggest problem is that we can't really learn why lying behavior is from observation and trial-and-error: If someone's successfully snookered you, then by definition, you won't know it. Some trained professionals can practice and practice and get a little better at telling when people are lying, but even they fall far, far short of perfection.