Tipping Points
Tim Fenton's paper on climate "tipping points" is a nice little summary of the subject. (Via.) Basically, he's identifying seven tipping points that could be reached by the end of the century, if the planet continues to warm, with the most worrisome--in the short term--being the point at which the Greenland ice sheet will start melting irreversibly. All told, there's enough ice there to raise sea levels by around 7 meters, should it all slide into the ocean. 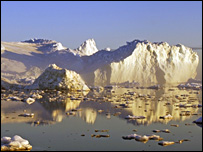 Now, the latest IPCC report suggested that we could reach that tipping point once global temperatures climb 1-2 degrees above pre-industrial levels (we're already locked in for about 0.7 degrees), at which point the Greenland ice sheet would start vanishing and take about 1000 years to disappear completely. Fenton thinks that the IPCC tends to be cautious about tipping points, and notes that the ice sheet could melt in as little as 300 years. Not fun. And, as he points out, if we limit global warming to under 2 degrees C, we could probably avoid most of the major tipping points, although even that's not guaranteed. (Especially since it's possible that we've already passed several--including one for Arctic sea ice.)

On a related note, Gavin Schmidt had a nuanced discussion of "tipping points" that's useful. It comes up often enough in the news that it's worth being clear about the concept. Personally, I've always filed this under "Scary Shit," but I guess that's what makes me an alarmist, eh?