Skid Row Ceasefire
That's awfully nice of them: According to the Times, the LAPD has agreed to stop cracking down on homeless folks sleeping on sidewalks in Skid Row, at least until the city provides 1,250 new beds in low-income housing. Still, 1,250 new beds isn't much. And some of the shelters aren't any safer than the streets: 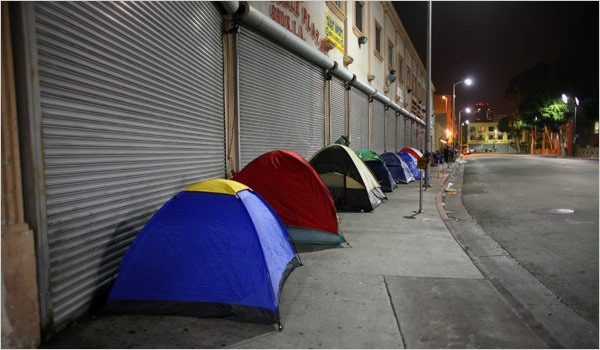 But while there are 17,000 shelter beds in Los Angeles County, most of them within the city, there are some 74,000 homeless across the county's 4,060 square miles, officials say. And despite the decline in their numbers on Skid Row, it remains an area with one of the nation's largest concentrations of the homeless. As a result, the shelters remain full every night, said Andy Bales, chief executive of the Union Rescue Mission, which operates one of them.

Though the shelters have set up courtyard cots to accommodate the nightly overflow, some of the homeless prefer the street, which, they say, is safer. One woman, Guadalupe Ibarra, who showers and eats at the missions but does not sleep there because she fears for her safety, gestured at the sleeping bags and tents under a store's awning. "This is our residence," she said. "We all respect each other here."

Here's an earlier post on the crackdown, which seems to be driven mostly by the gentrification of downtown L.A. (because, hey, who wants "wandering drunks and drug addicts" hanging around near their refurbished lofts?). The Times estimates that about half of the 8,000 homeless in Skid Row have been driven out to parts unknown, most likely to areas where it's harder to find shelter, services, food, and so on. It doesn't seem to have accomplished much of anything, really.

P.S. I came across this a few days ago, but Russ Rymer's 2001 piece on Skid Row for Mother Jones is really quite nuanced and excellent.