Mmm... Jellyfish...
Raffi Khatchadourian has an engrossing New Yorker profile of Paul Watson, a green activist who roams the ocean in a rusty North Sea ocean trawler, looking for whaling ships to harass and, if necessary, ram. There's a smart aside about how it wasn't until the mid-1990s that fisheries scientists fully grasped the scale of the damage over-fishing has done to the ocean. Plus this dystopian vision: 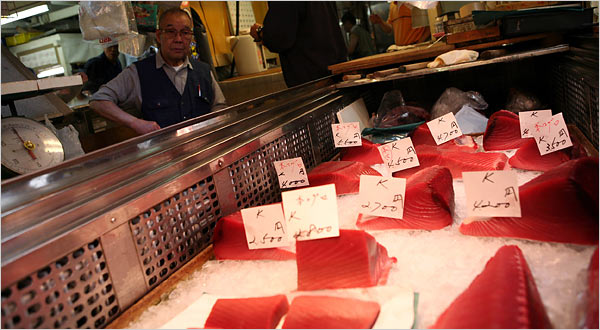 When Pauly and others took a longer view, they noticed another worrying trend. Humanity had been eating its way down the ocean’s food web; as large marine predators became scarce, people developed a taste for smaller and smaller fish. Animals that were once used for bait or that were considered worthless (hagfish, sea cucumber) were later taken in large quantities for human consumption.

"Bait thirty years ago was calamari," Pauly told me. "Now it is served in a restaurant. It is very nice. But it was bait before." Future generations, Pauly predicts, only half in jest, will grow up on jellyfish sandwiches.

Yum. Meanwhile, Japan, which scarfs down a quarter of the world's tuna catch, has agreed to reduce its fishing quotas for southern bluefin tuna and Atlantic bluefin—the fish used in sushi—because stocks are being depleted. It's not clear how strictly the fishing limits will be obeyed, though: Apparently, fisherman caught twice their legal quota of bluefin tuna in European waters this year. It's probably only a matter of time before bluefin goes extinct altogether, and we really do have to eat jellyfish sushi. The Times did a "light" piece a while back about the rise of deer-meat sushi, although the ravaging of the oceans is fairly unnerving.

P.S. I seem to recall reading somewhere that, waaaay back in the olden days, Japanese cooks didn't really use tuna in sushi—they preferred mackerel and snapper—and that tuna-mania was a twentieth-century invention, spurred during the U.S. occupation by soldiers who preferred fatty "red meat." But nowadays you read passages like this: "Without a sizeable slab of rich red flesh on prominent display, a sushi restaurant in [Japan] loses face—and customers."

P.P.S. In comments, Randy Paul points out that it's too late, our jelly fish future has already arrived.