Is the Drug War Inevitable?
"All told, the United States has spent an estimated $500 billion to fight drugs—with very little to show for it." That's the short version. The long version is Ben Wallace-Wells 15,000-word Rolling Stone cover story this month, where you can read all about how, thanks to the "War on Drugs," prison populations have ballooned, cocaine prices have plunged, and the U.S. military has inserted itself into a civil war in Colombia. Mostly, though, I was interested in examples of what alternative policies might look like: 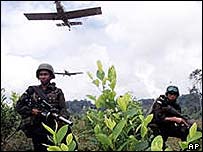 In the summer of 2003, the police department in High Point, North Carolina, held its annual command-staff retreat. … One topic dominated the conversation: an increase in violent crime that was concentrated in three drug-dealing neighborhoods in the city. "The place we were at was that all the traditional enforcement was making no difference," says the department's deputy chief, Marty Sumner. "We agreed we weren't going to be able to eliminate drug use. We weren't even going to try to go after drug use. We wanted to change the marketing of the drug."

Sumner's department called in the Harvard criminologist David Kennedy. The High Point police had worked with Kennedy before, adopting the Boston Gun Project's policy of trying to break the link between drugs and crime. Now the criminologist told them that he had a new kind of project to propose, one that went beyond the Boston experiment. Kennedy's pitch was simple: The trick, he said, wasn't to focus on eliminating drugs but rather to shut down the most "overt" drug markets, the ones operating so openly that they attracted prostitution and violent crime. "Instead of looking at it as a drug problem, we decided to think of it as a drug-market problem," Sumner says. "What the public really couldn't stand was the violence associated with public drug markets." Dealers operating in the open are targets for stickup men and other would-be robbers, and the public swagger and turf consciousness of street slingers can cradle violent, simmering beefs.

High Point police began in the West End neighborhood, one of the city's three overt drug markets. A team of officers staked out the site, videotaping hundreds of hand-to-hand sales and mapping out a complete anthropology of the West End drug market. They found it was strikingly small: Sumner had expected as many as fifty dealers working there, but it turned out there were only sixteen. Before long, the officers had enough evidence to put away each of the sixteen dealers for good. But they didn't. Instead, Sumner and Kennedy called them in for a meeting. They showed each of them the portfolio of evidence against them and said that unless they stopped dealing drugs, the whole file would be handed over to the prosecutors and they'd be in jail for years. Family members were brought in to urge the dealers to stop, and social-service providers pledged assistance with food, housing and job training.

"We didn't think it would work," Sumner tells me, "but the drug markets have disappeared." …

In 2007, in the program's fourth year, [the number of drug-related murders] has plummeted to two. Violent crime in the West End has declined by thirty-five percent. "The use of drugs isn't something we could affect," says Kennedy. "But the violence was." His logic has an appealing clarity for overworked police departments: There are now more than sixty cities in the United States that use some version of Kennedy's program, edging away from thirty-five years of punitive measures that have turned the United States into the world's leading jailer to a social-work model that encourages communities and cops to engage the problem on a more human level.

The basic logic is to focus on drug-related murders and ignore those users and dealers who aren't causing violence. By all accounts, it works better than the usual old strategies. (But does it work better than, say, outright decriminalization or legalization would? No one's saying.) Local governments are paying attention. A few years ago, though, Mother Jones did a profile of David Kennedy and his approach to gang violence, noting that, despite Kennedy-inspired successes in Boston and elsewhere, the FBI and Congress have largely ignored his work.

Normally, this would be my cue to toss off a line about how Congress will never change, but the one encouraging aspect of Wallace-Wells's piece is that it gives some hope that the drug war isn't totally inevitable. Bill Clinton's first drug czar, Lee Brown, actually had non-crazy ideas about drug policy—even endorsing a RAND study showing that treatment was a better way to tackle drug use than throwing millions of black men in prison and gunning down traffickers overseas. But Brown was a poor spokesman, and soon Newt Gingrich came to power, at which point Clinton, worried about looking "soft," appointed Gen. Barry McCaffrey, who gave us pointless anti-marijuana ads and Plan Colombia. With a little luck, though, things might've turned out differently. Or is that naive?

P.S. Of course, the Lee Brown tale is also a reminder that, even though Barack Obama and John Edwards are hating on the "war on drugs" now, the pressures to stay the course once in office are considerable. But as for Hillary Clinton... well, as Marc Ambinder notes, she's come out against even applying the new guidelines on crack sentencing to current prisoners. It's a modest proposal—affecting maybe 20,000 crack offenders who were punished under the old, stricter guidelines—but totally sensible, and the fact that she's against even that is a good sign that she probably won't touch the drug-war status quo. (The same goes for all the Republicans, except for, maybe, Huckabee.)

P.P.S. Curiously enough, Wallace-Wells reports that Chris Dodd—who now has one of the more liberal drug-war stances around and supports marijuana decriminalization—might've been partly to blame for Plan Colombia. Rumor has it that Dodd originally pushed the plan so as to benefit a helicopter manufacturer in his home state. Rand Beers offers Rolling Stone only this cryptic comment: "Much has been made of the notion that this was Dodd looking to sell Blackhawks to Colombia. ... [pause] I am not in a position to tell you it didn't happen."