Will the Amazon Survive?
In another must-read New York Review of Books essay, John Terborgh argues that out-of-control fires may be the Amazon rainforest's undoing—and they may come sooner than we think: 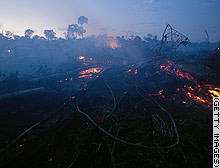 Humid tropical forests simply don't burn, or at least that was the conventional wisdom. After all, millions of fires are set in tropical forest regions every year in conjunction with the slash-and-burn methods used to clear land for agriculture; yet the fires almost never escape into the surrounding forest. But in 1983, the large-scale fluctuation in climate called El Niño brought about a different reality. Southeast Asia became a tinderbox after unprecedented drought. Fires broke out and burned for months in the equatorial rainforests of Borneo, creating a pall of acrid smoke that shut down airports hundreds of miles away and caused respiratory distress in thousands.

Scientists investigating the causes and consequences of the Borneo fires discovered an important corollary. Forests that had been logged were the ones that burned; unlogged forests resisted fire. Logging synergizes fire in two ways. First, cutting down trees opens the forest canopy, admitting sunlight and drying out the leaf litter on the forest floor. Second, the debris of branches, chips, and stumps left behind by logging operations serves as fuel for any subsequent fire. For these two reasons, fire can propagate through logged forest under drought conditions but usually peters out in unlogged forests.

Ground fires burned huge tracts of Amazonian forest in conjunction with the El Niño of 1997 and 1998. The toll promises to be far more severe in the future. The first time a tropical forest burns, the damage can hardly be detected from above because the destruction is largely confined to saplings and small trees whose crowns lie below the canopy. But the subsequent presence of large numbers of dead trees greatly increases the fuel available to stoke the next fire. Consequently, second fires burn hotter and more destructively, killing large trees as well as practically all smaller ones.

And, of course, second fires generate even more fuel for the third fire. Colleagues of mine who study this subject, notably, Carlos Peres and Jos Barlow of the University of East Anglia (UK) and William Laurance of the Smithsonian Tropical Research Institute in Panama, assert that the third fire spells doom for the forest, since it kills all remaining trees. After that, the land once occupied by forest fills with coarse shrubs and grasses that become flammable every dry season. Fires then become a permanent feature of a transformed ecology and defeat the prospects for recovering the forest. Millions of acres of forest are now primed to burn a second time and millions more are primed for the first burn, thanks to the wave of rampant logging that has spread through the region.

Scary stuff. Terborgh's conclusion is harsh, but probably accurate: Brazil is going to keep hacking away at the Amazon—and, hence, increasing the risk of uncontrollable fire—until "an international community united by the specter of radical climate change" decides that it's worth paying Brazilians not to do so. The first version of the Kyoto Protocol didn't cover forests under its cap-and-trade system. Unless someone figures out how to account for them in a successor treaty, it may well be bye-bye Amazon rainforest—which would, in turn, further accelerate global warming.

P.S. Terborgh brings up the oft-overlooked point that about 40 percent of the Amazon basin actually lies not in Brazil, but in neighboring countries, and that in two of those countries—Peru and Venezuela—the vast majority of rainforest remains untouched, for various idiosyncratic reasons. But will that last forever? Maybe not. After all, a recent satellite analysis found that deforestation rates in Peru have surged over the past few years, as the logging industry expands... On the other hand, as Terborgh mentions in a follow-up exchange, support for conservation within Peru is remarkably strong, which can make all the difference in the world.

P.P.S. Also, note that this new report suggests that it would only take a very modest price on carbon to convince Brazilians not to hack down the rainforest. That's very good news.