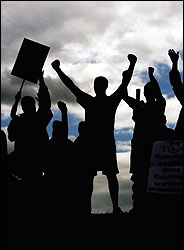 Back in December, Harold Meyerson wrote about how labor unions are increasingly going global and making alliances abroad. So the CWA will link arms with Germany's Ver.di to organize the German-owned T-Mobile here in the United States. But labor leaders aren't the only folks who can travel abroad: "U.S.-based transnationals [are trying] to bring their union-busting practices to their far-flung activities. At the moment... anti-union U.S. consultants are advising Chinese companies how to get around a mild Chinese labor-rights law that takes effect January 1."

Well, I was curious to learn more, and recently came across a paper by John Logan, a professor at the London School of Economics, on a related subject: As it turns out, not only are U.S. companies bringing anti-labor tactics overseas, but more and more foreign-based firms are calling the Americans for help in fending off their own organizing drives. Along with fighter jets and scrap metal, union-busting knowhow is becoming a major U.S. export—especially to the UK, Canada, and Ireland.

Take The Burke Group, a "union avoidance" firm that's been helping companies like GE, Coca Cola, MCI, and Kmart thwart organizing drives since the early 1980s (the firm claims a 96 percent success rate). In the past five years, TBG has been waging counter-organizing campaigns for clients in Britain, too: T-Mobile, Virgin Atlantic, Honeywell, FlyBe, Kettle Chips. During organizing drives, TBG will help convince workers that unionizing means wage cuts and job loss and, if necessary, will push employers to intimidate or fire organizers. Since British unions have had little experience with this sort of opposition, they've been getting crushed. Utterly crushed:

Following a five-year campaign to organize employees at General Electric Caledonian, Britain's largest private-sector union, Amicus, lost decisively a representation ballot in June 2002. Unaware that that Burke consultants were running the company's campaign, one bewildered union official remarked after the crushing defeat: "We have been blown out of the water… The result is a huge shock. We can’t explain why our arguments for union recognition have been rejected…It is quite obvious that those who said they would vote for us have changed their mind. God knows why."

The GE campaign is not an isolated case. The British union running the organizing drive at Amazon, the Graphical Print and Media Union, reported that the company mounted the most aggressive anti-union campaign it had ever encountered and accused management of sacking union activists and committing several other illegal practices. The union has temporarily abandoned its flagship organizing drive among distribution employees at Amazon.

It's an ugly scene. And notice, it took at least few decades for union-busting to become a billion-dollar industry and permanent fixture on the American labor landscape. Britain's getting there a lot quicker.