The Great Dinosaur Wars
Excuse me, but I'm on a Wikipedia bender lately. I just can't stop clicking. So here we go: The Bone Wars? This was a real thing? Oh yes. Yes it was. In the latter third of the 19th century, we learn, a pair of rival American paleontologists, Edward Drinker Cope and Othaniel Charles Marsh "used underhanded methods to out-compete each other in the field, resorting to bribery, theft, and destruction of bones." 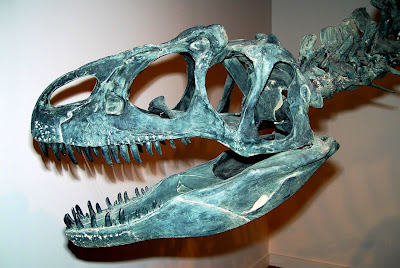 This wasn't as gruesome as it sounds: The rivalry did spur a race to excavate, which in turn led to the discovery of 142 new species of dinosaur, including childhood favs like Triceratops, Stegosaurus, and Allosaurus. A word of appreciation, by the way, for Allosaurus: The dinosaur books I gobbled up as a kid were usually divided into three eras: the Triassic (lame chicken-sized dinosaurs), Jurassic (now these were terrible lizards…) and finally the glorious Cretaceous (oh hell yes). The Allosaurus was a late Jurassic beast, usually shown scarfing down chunks of Brontosaurus meat, and he signified a child's very first encounter with the truly massive, peerless carnivores of yore—dominating the imagination for a brief while until you flipped a few pages and stumbled across the Cretaceous-era Tyrannosaurus Rex, king of all predators. (I understand now they have Spinosaurus and other gigantic brutes that put T. Rex to shame—well, T. Rex is still top lizard in my book.)

Anyway, back to our dueling paleontologists:

On one occasion, the two scientists had gone on a fossil-collecting expedition to Cope's marl pits in New Jersey, where William Parker Foulke had discovered the holotype specimen of Hadrosaurus foulkii, described by the paleontologist Joseph Leidy; this was one of the first American dinosaur finds, and the pits were still rich with fossils.

Though the two parted amicably, Marsh secretly bribed the pit operators to divert the fossils they were discovering to him, instead of Cope. The two began attacking each other in papers and publications, and their personal relations soured. Marsh humiliated Cope by pointing out his reconstruction of the plesiosaur Elasmosaurus was flawed, with the head placed where the tail should have been. ... Cope tried to cover up his mistake by purchasing every copy he could find of the journal it was published in.

In the end, Marsh won the Bone Wars, digging up and naming 80 new species of dinosaur, versus Cope's piteous 56. But paleontology itself was the real loser—not only was the profession's good name blighted for decades by their tomfoolery, but "the reported use of dynamite and sabotage by employees of both men destroyed or buried hundreds of potentially critical fossil remains." Oh dear.

Even worse, the two miscreants would often hastily slap all sorts of bones together in their race to unveil new species, and they often assembled incorrect skeletons that sowed confusion for decades. Marsh, it turns out, was the wiseguy who fit a human skull on a looming sauropod's torso and named his creation Brontosaurus (it later had to be rechristened Apatosaurus, once it was given its correct head—the real tragedy is that the new name was clumsier and not quite so fearsome: "Apatosaurus" means "deceptive lizard"; right, uh-huh, like there's anything deceptive about that dude.)