Recycled Cities, Prefab Homes
Over at The Nation, architect Teddy Cruz walks us through Tijuana, which has been built, in large part, using waste materials from neighboring San Diego—garage doors, box crates, old tires, even abandoned post-World War II bungalows that are loaded onto trailers and shipped south. Who knew you could recycle an entire city? There's even a YouTube clip, by filmmaker Laura Hanna:

That video, incidentally, was included in the Home Delivery: Fabricating the Modern Dwelling exhibit at the MoMa, which was reviewed by architecture critic Sarah Williams Goldhagen in the current issue of The New Republic.

Goldhagen's review, by the way, is provocative and very much worth reading. She observes that, compared with other countries, prefabricated homes are curiously rare in the United States. (In Sweden, by contrast, 85 percent of homes are largely prefab, and yes, Ikea offers models.) In theory, mass-produced homes could be cheaper, the quality could be more consistent, and—here's the bonus environmental angle—they're likely to be a great deal greener than the usual contractor-built ("stick-built") variety. There's no reason prefabs have to be hideous, either, or shoddy, or drearily uniform in appearance. Trouble is, building codes vary so widely from town to town in this country that it's impractical for prefab homes to take hold. Is that a good thing? Goldhagen says probably not:

What these exhibitions demonstrated is that there is no dearth of splendid ideas for prefabricated mass-produced housing. Were the best of these ideas adopted by the market—and in the right climate, more good ideas would be forthcoming—there is no doubt that the bulk of newly constructed houses would be less toxic to the environment, better built, and last longer with fewer repairs. They would more fully and attractively accommodate the ways people currently live. 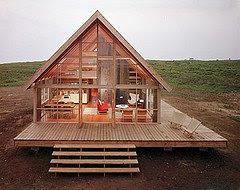 Why do we continue to settle for residential litter in ever-more-degrading landscapes? That is the question these exhibitions fail to address. But of course it is not an architectural question. In social policies, better ideas by savvier architects will change little. For quality affordable mass-produced housing to be built, we need to create different conditions for a mass market. A new legislative structure must clear away the obstacles presented by non-standard, municipally controlled building codes and create enforceable national standards for prefab-friendly, environmentally responsible manufacturing and construction practices. Incentives must be offered so that the entrenched and intransigent construction industry, which has made plenty of money on its poorly conceived, shoddily built, environmentally toxic houses, will re-configure itself.

If the necessary legislation were passed and new market incentives put in place, and the designers and manufacturers of prefabricated homes made all the real innovations in quality and reduction of price that the automobile industry has made since the Model T, who would walk away from a better designed and better built home for less money?

Et voilà—the future of homebuilding in the United States? I have no clue, but assuming energy and environmental issues continue to be central in the coming years (and why wouldn't they be?), I'd expect the question to bubble up now and again. Greening the construction industry and our built environment, after all, pretty much has to be a big part of any push to nudge down those greenhouse-gas emissions.